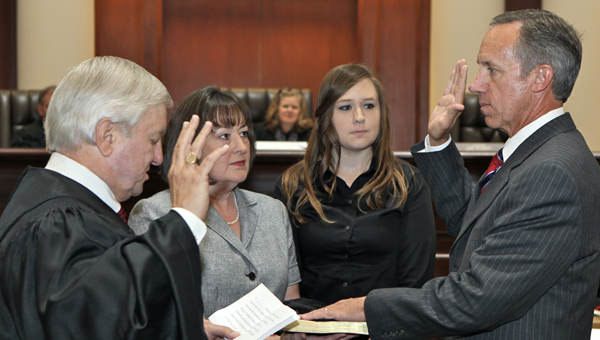 Judge Michael Joiner was formally invested April 6 in Montgomery as a member of the Alabama Court of Criminal Appeals.

With Chief Justice Sue Bell Cobb presiding, members of the Alabama Supreme Court, the Court of Civil Appeals, and the Court of Criminal Appeals sat together in formal session for the investiture service.

Judge Liles Burke also was invested to the state’s Court of Appeals.

After Lt. Gov. Kay Ivey opened the ceremony with a prayer, Justice Allen Main administered the oath to Joiner, who was then officially robed as a member of the court by his wife, Cathy, and daughter, Christy.

A representative from the office of Gov. Robert Bentley presented joiner with a commission of office at the close of the ceremony.

In remarks to the attendees, Joiner pledged to apply the law fairly and justly. He thanked his fellow judges from Shelby County for their help, friendship and support during his 18 years as a Shelby County Circuit Judge, and he cited their efforts in helping him to reform Shelby County’s Drug Courts and Community Corrections.

“These programs have served as models statewide,” Joiner said, “and have literally changed thousands of lives.”

Joiner also thanked his family and his fellow trial and appellate judges for their support through the years.

The investiture service was held in Alabama’s Supreme Court courtroom in the Judicial Building in Montgomery. Approximately 200 people attended the ceremony, including friends and family of the two new judges and more than 25 trial judges and legislators from around the state.

The Alabama Court of Criminal Appeals is composed of five judges.

The Court hears appeals and petitions for extraordinary writs in felony and misdemeanor cases from the state’s trial courts, including cases involving violations of city ordinances and post-conviction proceedings.