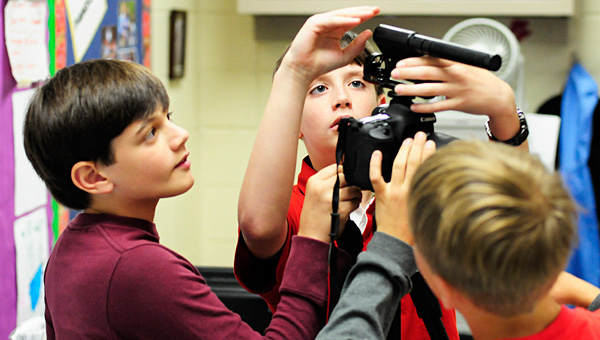 Chelsea Intermediate student Elliot Campbell, center, adjusts the microphone on the camera the class is using to film the movie while classmates Noah Lunsford, left, and Garrett Davison help out. (Reporter Photo/Jon Goering)

CHELSEA – The fifth-grade students of Daryl Hyde’s Chelsea Intermediate School class energetically worked on their renditions of the impending fight scene for their movie “Secrets,” an alien-invasion movie.

The class will watch the movie at a private showing for family and friends at the Rave Motion Pictures at Lee Branch May 14.

“We did auditions, and I cast whoever acted the craziest on camera,” Hyde said of his actors. “The kids write themselves into the script. We’re having trouble with the fight scene because the kids are too sweet.” 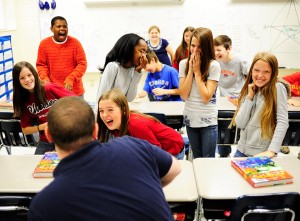 Students in Daryl Hyde's fifth grade class at Chelsea Intermediate laugh at a funny line during the filming of their movie on April 13. (Reporter Photo/Jon Goering)

Hyde uses the practice of script writing to teach the kids continuity and writing and story-telling skills.

“Writing is the most genuine purpose and intent; it’s all about the writing process,” Hyde said, “and it’s just a lot of stinkin’ fun.”

The students sat cross-legged on the floor as Hyde read the hand-written fight scenes aloud. With suggestions from sock-monkey fights to wet willies, the fifth-graders used their imaginations and creative-writing skills to develop coherent storylines. 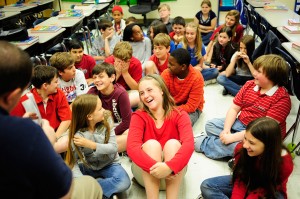 Daryl Hyde's fifth grade students at Chelsea Intermediate laugh as the class goes over ideas for the fight scene in the movie the class is making. (Reporter Photo/Jon Goering)

“It’s really fun. I like the process of it,” leading actress Lauren Kelly said. “I get nervous when writing my script, but when it gets chosen, I’m like, ‘Yes!’ When I hear it being said by people, it’s great.”

Jacob Shaw said he practiced with videos on YouTube in anticipation of this opportunity.

“It’s fun to be on the screen and see my face,” Shaw said. “When I finally got in Mr. Hyde’s class, I was hoping for a lead role.”

“We’re going to have a slow-motion fight, and Mr. Hyde will speed it up,” Jones said of his impending fight scene with Shaw. “It’s really fun, because (Mr. Shaw) tricks us into doing a writing assignment. It’s an honor for me to be a lead role.”

By KATIE HURST/ Lifestyles Editor MONTEVALLO — Early one morning when Dylan Lard was 18, he hopped in the car... read more