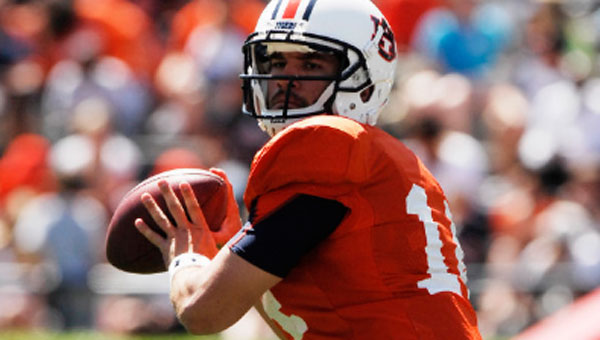 Former Briarwood Christian School standout Barrett Trotter made his case to be the starting quarterback at Auburn University after tossing the lone touchdown in the Tigers’ spring A-Day game April 16.

Trotter, a redshirt junior who is battling Clint Moseley to replace Heisman Trophy winner Cam Newton, completed 6-of-12 passes for 120 yards and a touchdown in the defending national champions’ two-hour scrimmage at Jordan-Hare Stadium.

Trotter was the first quarterback to see action in the game and led the offense on an 8-play, 73-yard scoring drive to start the game.

Trotter completed a 24-yard pass to Phillip Lutzenkirchen and tossed an 11-yard pass to Trovon Reed on a bubble screen before finding Lutzenkirchen open for a 19-yard touchdown on the opening drive. Trotter finished the drive 3-of-5 passing for 54 yards.

Trotter completed a 48-yard pass to DeAngelo Benton in the second quarter, which accounted for the offense’s longest play from scrimmage in the game.

Trotter will have to wait a little longer to find out if he will take the first snap of the 2011 season in the Tigers’ season opener Sept. 3 against Utah State.

Auburn head coach Gene Chizik said the competition, which is expected to include true freshman Kiehl Frazier when he arrives in the fall, is too close to call heading into summer workouts.

Chizik said consistency is the biggest thing Trotter and his competitor needs to work on before fall practice begins.

“I think that they are very similar right now in nature,” Chizik said. “I think probably the thing that stands out most after going through the past 14 days is the inconsistency from both of them. That is what we are trying to get out of our quarterback position right now. We are trying to find someone who can manage the game and manage the team and protect the football and things of that nature. They both do that fairly well.”

Chizik said he saw positives from both Trotter and Moseley during spring practice.

“We just have to be more consistent at that position, but both of them have a very good feel for the offense,” Chizik said. “They understand that they have a good feel for it. I don’t think that that is an issue. Obviously the more they are in there with live fast reps, the more that it will help. Overall, consistency is what we are looking for in moving forward.”

Trotter said his first spring practice working mainly with the Tigers’ first-team offense helped him build a rhythm with his receivers.

“I tried to focus on maintaining a high completion percentage and developing myself as a leader of this team,” Trotter said. “Today’s game allowed us to get a feel for playing in a game-day atmosphere. It also let us get on the same page as a team. It also let me get a better connection with the receivers and let us improve our timing on the field.”

Former Pelham High School standout Jake Holland, a sophomore middle linebacker at Auburn, started on defense and finished with one tackle in the scrimmage. Holland tracked down starting running back Michael Dyer on the offense’s opening possession.

Holland said spring practice helped him get a better of idea of what he needs to work on before fall practice begins in August.

“I’ve got to keep running around, finding the ball, and making the play,” Holland said. “I’ve got to keep using my eyes, working on pass coverage, and continuing to improve my physicality.”

Briarwood Christian School senior Logan Crook lines a base hit up the middle in the Lions' 12-2 win over rival... read more