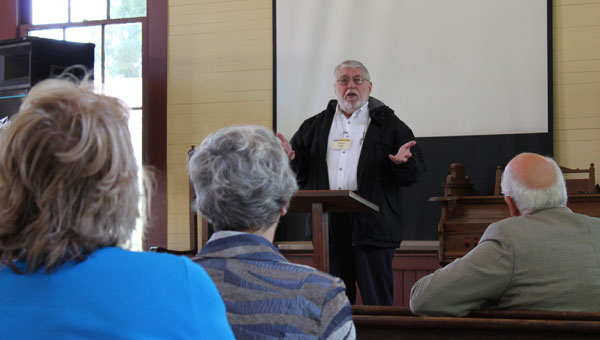 Author William Cobb reads from his latest novel, "The Last Queen of the Gypsies," at the Alabama Book Festival in Montgomery April 16. (Reporter photo/Christine Boatwright)

MONTGOMERY – With a southern drawl as thick as honey, Montevallo author William Cobb read from his latest novel, “The Last Queen of the Gypsies,” at the Alabama Book Festival April 16.

Cobb, who is Emeritus Professor of English and writer-in-residence at the University of Montevallo, wrote his most recent novel set from 1933-1964.

“It’s a quest novel, as most novels are,” Cobb said. “I won’t tell you how the book works out, but you can guess how it works out.”

Cobb said his favorite character in the novel is Mrs. Mac, an elderly woman with dementia.

“I’m particularly fond of Mrs. Mac, although saying she’s my favorite is like saying who’s your favorite child,” Cobb said. “With dementia in the family, you have to laugh because it’s otherwise it’s tragic.”

Cobb is originally from Demopolis, and said his fascination with gypsies began as a child.

“I would go out and spy on gypsies as a child,” he said. “I always assumed they were passing through going nowhere, but they were actually on a pilgrimage to Meridian, Mississippi to visit the grave of the last queen of the gypsies.”

The novel’s young characters face tragedy and heartache only to overcome in the end, Cobb’s wife, Loretta, said.

“Children are handed difficult situations, and the novel attempts to celebrate victory rather than wallow in it,” Loretta, also Emeritus Professor of English at the University of Montevallo, said. “It’s not a book recommended for children; it’s more for adults.”

Cobb set his most recent novel in the South.

“It’s set in the South because it’s what I’m familiar with,” he said. “Since retiring, I’ve been writing full time. My next novel is not quite in the pipeline yet.

“My advice to young writers who sign a contract is to start on another book immediately. Don’t wait around,” Cobb said.