Your help needed in effort to fight autism

April is Autism Awareness Month. With 1 out of every 110 children being diagnosed with it each year in the United States, Shelby County has its share of those affected by autism.

Angie and David Blackwell’s 9-year-old son, Raleigh, is one of them.

Raleigh looks like any other 9-year-old, but he cannot communicate in ways other children his age do. He lacks verbal and social skills and lives in a world of his own most of the time. He acknowledges his sister, Bailey, but doesn’t usually interact with her unless directed to do so. He experiences “melt downs,” which people often view as temper tantrums, though they are classical symptoms of autism. 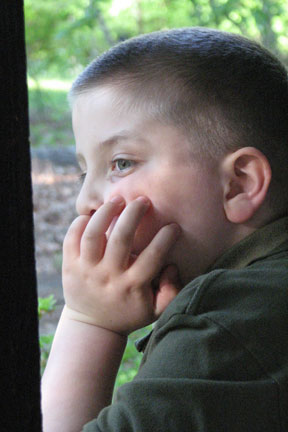 Raleigh Blackwell, 9, is a student at Oak Mountain Elementary and the son of Angie and David Blackwell. (Contributed)

Once seen as a single disorder, autism is now seen as a spectrum with varying degrees of the disorder. Autism Spectrum Disorder (ASD) is an array of symptoms. It is a developmental disorder that affects a child’s communication and interaction with others. It is usually diagnosed before the age of 3.

Raleigh’s diagnosis is considered moderate to severe. He attends Oak Mountain Elementary School. Though his parents describe the school as “awesome,” they say there is so much more that needs to be done — additional speech and physical therapy, advanced programs geared specifically for autistic children and extended school days during the summer months.

“There are many opportunities for high-functioning children in Alabama, but we are lacking in treatment for the middle to lower end of the spectrum,” said David Blackwell.

The Blackwells previously lived in Delaware, where autistic children are being taught vocations preparing them to have jobs as adults at frame shops and t-shirt factories.

Raleigh was diagnosed before his first birthday when he displayed signs of “scrambling, being aloof, quirky and was flipping small things back and forth. He would walk backwards or on his toes and wasn’t progressing with his language,” he said.

Research must go much further in discovering the mysteries of this disorder because it is being diagnosed at greater numbers today than ever before and no one knows why.

Zumba phenomenon on the rise

Instructor Merri Gwin leads a Zumba class. (Contributed) By LAURA BROOKHART / Community Columnist Are you one of the few... read more