Craig Yancy is always there

It’s Easter! Let us rejoice! One of my favorite songs says “When He was on the cross, I was on his mind.” If you think about that with all the personal failures and sins we each carry … that is a profound statement. Why would Jesus die for us — rich or poor, tall or short, dark or light, bald or hairy, young or old, good (as much as we can be) or bad? In general we are “the common mankind.”

Our profile this week is one of those “common men.” Born in Long Beach, Calif., while his dad was in the service, he was soon back on Alabama soil near Fort Payne (where his parents were originally raised). In his fourth-grade year, they moved to Hoover and then to Alabaster the next year. By then two younger brothers had joined the family.

Craig Yancy graduated in 1988 from Thompson High School and attended Bessemer State, where he received and associate degree in applied technology. He has had numerous jobs in several fields — auto mechanic, rental equipment sales and service and drill technician specialist. He has worked for several employers including United Rentals, Just Russ Rentals, Hertz and Cowan Equipment. 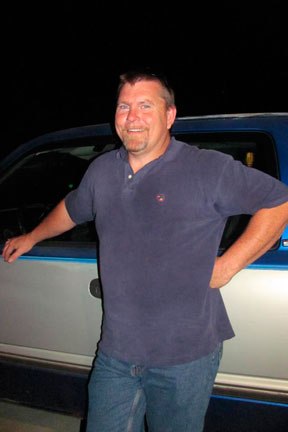 Yancy’s second marriage to Debra Barashes took place December 6, 1997. He acquired step-daughter Beth Barashes, and he and Debra had daughter Anna on June 18, 1999. In August of 1999 our “everyday Joe” or common man had tragedy strike his family. His younger brother (by 16 months), Scott Yancy, was murdered at Ferguson Enterprises in Pelham along with a friend, Lee Holdbrooks. The killer went on down Highway 31 and killed again at Air Gas. Most of us remember this tragedy from the many television and newspaper accounts. The murderer still sits on death row.

Yancy was denied growing old with his brother and raising their children together. Scott left a widow, daughter and son.

At present, the Yancys have fought hard to “keep on keeping on.” The recession and cutbacks have affected he and wife Debra’s employment. Currently, Yancy works at Ingram Equipment on Heil garbage trucks, Tymco vacuum trucks and Pac-Mac limb loaders. He loves working on aerial lifts.

Personal passions or hobbies include NASCAR (Dale, Jr.), hunting, fishing and a dream of cattle farming. Both Craig and Debra would love a trip down under and his dream is a big hunt in Africa. His relaxation is listening to oldies and country music.

Yancy says his maternal grandfather, J.B. Thompson, was his mentor and taught him all about being a handyman and fixer-upper.

Raised in a Christian family, he believes in “making someone happy” and not judging people. He refuses to “live off the public,” and wants his girls to have an education and be independent. The old-school discipline of manners comes easily to him. At church he is quick to help with any repairs or yard work. He served as a deacon, and seems to be available anytime someone needs help to their car, a cane or wheelchair retrieved or just a hug and kind word. Craig Yancy — our common man — is there.