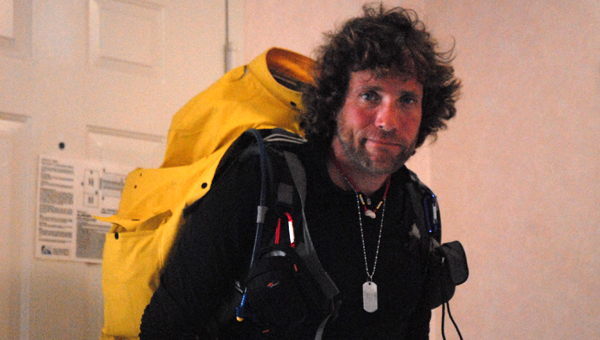 Richard "Rik" Remus stops to pose for a photo after arriving to spend the night at a Calera hotel April 26. (Reporter photo/Brad Gaskins)

CALERA – A Washington man is spending tonight at a Calera hotel before continuing Wednesday with a 5,000-mile walk to bring awareness to the dangers of meth.

Richard “Rik” Remus, 39, began walking in Boise, Idaho, in October 2010 and will end his “Miles Against Meth Abuse” campaign in San Diego sometime in August.

He’s been traveling through Shelby County since Sunday.

Remus, who is from Walla Walla, Wash., is scheduled Wednesday morning to begin walking towards Montgomery. Once he reaches Daleville, Ala., he will turn west toward Louisiana.

Remus said he walks as much as possible and, though he said he never hitchhikes, he does accept rides from strangers if they offer. Doing so, he said, gives him the chance to talk to others about the dangers of addiction.

“It’s not a contest out here to see how strong I am,” Remus said. “It’s a contest to see how much knowledge I can share with people. If I’m walking by myself on the road, that’s not happening.”

He carries a camping backpack with three sets of clothes, a tent, snacks, rain gear and eight pounds of water. There’s a handwritten message in large letters on the back of his pack, reading: “If I can walk 5,000 miles in the hopes of helping one person, what can you do with a little bit of hope?” 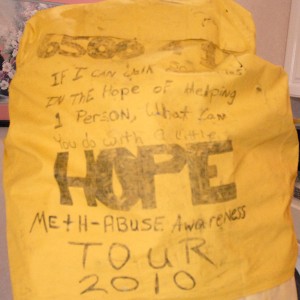 The message on the back of his backpack reads: “If I can walk 5,000 miles in the hopes of helping one person, what can you do with a little bit of hope?” (Reporter photo/Brad Gaskins)

Remus, the father of five children ages 9-20, said he got clean on his on by moving to Las Vegas in April 2010.

While there, he said he lived out of his car, sold water on the street and moved frequently enough to avoid developing any type of associations with the wrong crowd.

He moved back to Washington state in June 2010 and began planning his walk, mostly to encourage his ex-fiancé and good friend to get off meth.

“I knew I couldn’t go back and dictate to them that they have to get sober,” Remus said. “The idea was that I’d do this walk to show them how much they mean to me.”

He said they both quit using during his trip, which is being financed by a network of supporters.

Portion of I-65 renamed for fallen Pelham officer

From Staff Reports MONTGOMERY — The Alabama legislature has passed a joint resolution renaming a section of I-65 after fallen Pelham... read more