Then came the devastating news of the horrible earthquake and tsunami.

Quickly the chaperones and the parents held a meeting and decided that this summer’s trip would be too risky and would cause excessive inconvenience for the host families. The students, of course, were terribly disappointed, but there was no crying, no grumbling and no whining. These terrific kids just got busy looking for some ways they could help the folks they had intended to visit.

Tamara Moriya, president of the Montevallo Sister Cities Commission, explained that though Echizen is across the mountain range and about 450 miles from the site of the actual disaster, the area is seriously affected, especially with shortages and the probable influx of evacuees fleeing the threat of radiation.

The students put their heads together and came up with a plan to raise money to send directly to Echizen and to let the mayor there decide its most effective use. 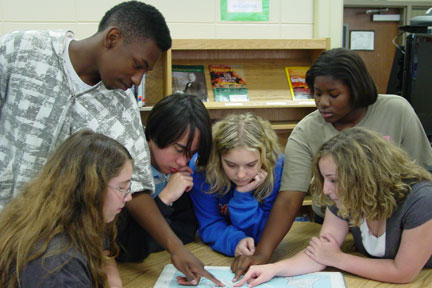 (L-R) Students Makayla Campbell, Devin Zeigler, Cebastian Cardozo, Kayla Snuggs, Makayla Cottingham and Mary Alice Hughes look for Echizen, Japan, to see how far it is from the site of the earthquake. (Contributed)

“It’s the least we could do,” said student Devin Zeigler. “I know if we had a disaster like that, they would help us.”

Another student, Mary Alice Hughes, said, “We should always help those countries who have these terrible disasters.”

A Montevallo/Echizen Spring Fest was held by the young people on April 2 in Orr Park, where they had inflatables, food and a table set up for donations. The $5 admission was evidenced by special armbands. Other projects included a candle sale and a mailing of letters asking for support. The money earned will go to Echizen and for the delayed trip.

Members of the group who were to visit Echizen this summer are students Zeigler, Hughes, Makayla Campbell, Cebastian Cardozo, Kayla Snuggs and Makayla Cottingham. Chaperones were to be Moriya, MMS Principal Dr. Shelia Lewis and UM Art Professor Ted Metz.

Other Montevallo groups raising funds for the relief efforts are almost all of the Montevallo churches, all three schools, UM, individual adults and children.

A sweet little reflection of Montevallo’s big heart was noted as little third-grader Avery Lawley sold lemonade from a stand set up on her grandparents’ lawn, giving the money she earned to the earthquake victims.

The MMS students ask for your help in sending the message, “we care,” to our friends in Echizen. To donate through their drive, please make your check payable to MSCC — Japan Earthquake Relief, and mail to Montevallo Middle School, 235 Samford St., Montevallo, AL 35115.

By LAURA BROOKHART / Community Columnist Vegetable gardening is making a comeback. That is unless you are one of the... read more