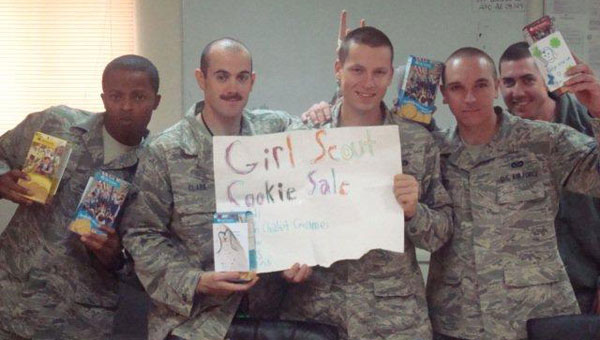 MONTEVALLO – Junior Girl Scouts of Troop 76 recently earned their Bronze Awards by sending a taste of home to an Air Force unit overseas and sewing stuffed bears for children who suffer fire or accident ordeals.

Wendy Argo, daughter of troop leader Linda Boothe, suggested the girls send Girl Scout cookies with hand-written cards to the Air Force unit of her friend, Master Sergeant Steve Stone, stationed in Qatar, Saudi Arabia. In response to the idea, citizens of Pea Ridge and Montevallo donated cookies to be mailed to the airmen.

“It’s a great idea for the girls to do something nice for someone else,” Argo said. “The cookies reminded them (the airmen) of sisters, moms and anyone they left at home.”

“The fire department (Brierfield Volunteer Fire and Rescue) gets so many calls on kids, and I wanted to make the kids feel better,” Smitherman said. “We made around 40 bears. We had to draw, cut, stuff and even sew the bears.” 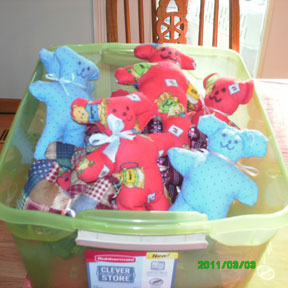 The Junior Girl Scouts created over 40 stuffed bears for the Brierfield Fire Department to give away to children. (Contributed)

The girls worked more than 20 hours learning how to create the bears, Boothe said. The troop presented the bears to the Brierfield Fire Department to pass out to children in need of something to cuddle after they go through a traumatic event.

“He never says anything down; he’s such a trooper,” Boothe said. “The girls loved it, and Mark enjoyed getting them.”

Regarding the shipment of Girl Scout cookies the Electrical Systems shop received from Troop 76:

I opened a large, plain brown cardboard box and discovered a treasure.  It was packed to capacity with brightly-colored boxes containing Girl Scout cookies of every variety.  Because the box was addressed to me, it was my honor to upend the container and spill the contents onto the table in our breakroom.  I then took three steps back as two dozen Airmen converged on the pile, each selecting a box before disentangling himself from the scrum.  One of the first guys out said ‘Hey, check out the card.’

To each box was affixed a simple card, handwritten by a Scout with a felt-tip marker and adorned with construction-paper cutouts of flowers.  The words ‘We <heart shape> you’ were written on each card.  This touched us all very much.  Every man here has a sister or niece or daughter who came to mind as we considered the young Scout who spent a few minutes to create a message for a man she did not know.  The cookies are great, a literal taste of home and a connection to the familiar world we all left months ago; the cards hold a deeper significance, connecting us personally with a young girl expressing her appreciation.  We felt pride in the efforts undertaken by Troop 76 and its leadership, and especially by the extra effort of each Scout to create and affix a card to every box.

The cookies did not last long; I had to be quick with the camera to get photographs of Airmen devouring them.  I sent those digital photos to Mrs. Linda Boothe, along with a scanned copy of the thank-you letter signed by each man in my section.

I hope this answers your question.  Feel free to reply if you desire more/different information, and thank you for lauding the excellence of Troop 76.