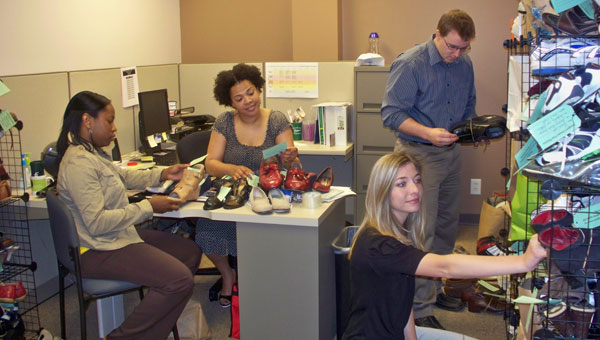 The American Lung Association office in Riverchase has teamed up with other local agencies in collecting 820 pairs of shoes to bring awareness to the negative impact tobacco addiction has on our state.

This initiative is funded by the Department of Health and Human Services.

The shoes being collected represent the number of preventable deaths each year in Alabama. They represent people from all walks of life:  local celebrities, elected officials, doctors and others who have either experienced firsthand the devastation that secondhand smoke can cause or know someone who has.

The use of tobacco is by far the number one most preventable cause of the three Ds:  disease, disability and death.  While 78% of Alabamians do not smoke, every year more than 800 die from exposure to secondhand smoke. It seems unfair. It is unfair, and it is preventable.

That is simply not true. For every eight smokers who die from using tobacco, one non-smoker dies simply from exposure to secondhand smoke.

Those who smoke are not only harming themselves, but others around them including their family members, work associates and fellow patrons at restaurants and other public places.

Another myth is that ventilation systems filter and totally remove the harm of secondhand smoke.

Again, not true. No ventilation system can do that and inhaling the chemicals found in tobacco smoke can cause cancer, cardiovascular and pulmonary disease.

Alabama needs to follow in the steps of other states in requesting smoke-free policies and venues. Secondhand smoke is a public health problem and one that needs to be addressed.

The 820 Souls Campaign will conclude with a ceremony May 18 at Railroad Park.

At that time, they will donate the shoes to local charities.

Edwin Grady of Montevallo has stories to tell

Edwin Grady stands before the plaque at the Nimintz Museum in Fredericksburg, Texas, honoring the World War II service of... read more