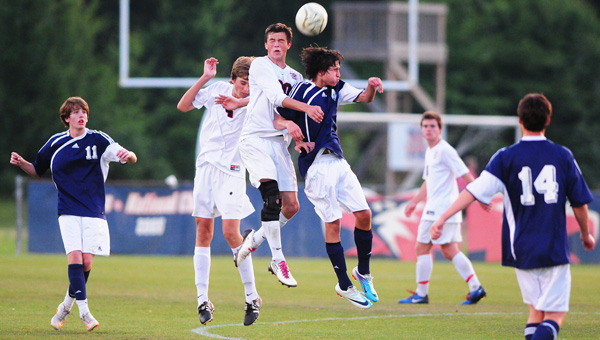 NORTH SHELBY — Oak Mountain High School boys’ soccer coach Ryan Patridge has one goal for his team each season regardless of the makeup of the Eagles’ roster.

When Oak Mountain players are assigned jerseys at the beginning of the season, the Eagles don’t plan on turning them back in until after a trip to Huntsville at the end of the year for the Alabama High School Athletic Association Class 6A Final Four.

The Eagles put the jerseys away early the past two seasons after getting bounced out of the Class 6A state tournament a match or two shy of the semifinals.

Oak Mountain, which owns three AHSAA Class 6A championships, will once again make the trip north to John Hunt Park to the Final Four following a 3-1 win over Huntsville in the AHSAA Class 6A quarterfinals May 9.

“That’s the expectation for the program,” Patridge said. “I don’t mind that pressure.”

Mills Sproull gave the Eagles (20-4-2) a 1-0 lead when he pounded a shot from the left side of the field into the far side of the netting with 33:17 left in the opening half.

Huntsville scored the equalizer to tie the match at 1-1 with 24:19 left in the first half.

The Eagles carried a 2-1 lead into halftime when Donny Maciel blasted a shot past the Huntsville goalkeeper from about 30 yards directly in front of the goal on a free kick with 19:49 remaining in the half.

Oak Mountain added an insurance goal in the second half. John Imwalle took a feed from teammate Tyler Aderholt and beat the Huntsville defense down the field and forced the goalkeeper to come away from the net, which allowed Imwalle to pound the ball around him to the far post with 27:44 remaining in the match.

“We needed the momentum switch,” Imwalle said. “We needed it back on our side.”

The Eagles dropped all three matches against the Rebels this season, including a 1-0 match at home that wasn’t decided until the third round of penalty kicks following a scoreless tie in regulation and two overtime periods.

Patridge said the Eagles struggled in two meetings on a synthetic surface. The match on the Eagles’ natural grass field was much closer.

“Luckily, the next match will be on a grass field,” Patridge said.

By NEAL WAGNER / City Editor A group of ex-high school and collegiate football players are looking to bring the... read more