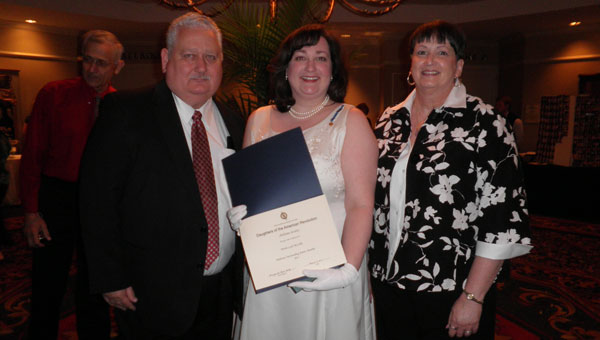 At the 2011 Alabama Daughters of the American Revolution Convention, parents Thomas and Donna McCully with daugher Marla after she won the DAR Outstanding Junior Award. (Contributed)

Marla McCully is an extraordinary young woman. She is the daughter of Thomas and Donna McCully of Chelsea and has a married brother, sister and niece. Family and roots are very important to her.

McCully graduated as valedictorian from Chelsea High School. She has attended the Universities of Montevallo and Arizona, taking course work in business. In 1997, she began her professional career as an intern with Merrill Lynch. She has received many professional accounting licensures and is fluent in Spanish. She is currently the controller at Porter White and Company.

McCully is active in her church where she volunteers teaching financial skills to those in need — how to make a budget and live within it.

McCully is a member of the Junior League of Birmingham, where she volunteers with SaveFirst Initiative. As a certified IRS tax preparer, she prepares income tax returns for free to low income working families. Last year, SaveFirst prepared tax returns for 3,200 families, securing more than $6.8 million in refunds and savings of $1 million in CPA fees. (see Impactalabama.org).

“I love this work,” said McCully. “I have learned you aren’t spending a Saturday doing someone’s taxes. You are helping change someone’s life.”

Her brother is a decorated career soldier with many deployments overseas. In 2005, while abroad, his wife was expecting their first child.

“As I began to ponder all the sacrifices that my brother – and much of my family – had endured to ensure the freedom of our country, I began to feel the gift I wanted to give my niece was a written legacy of her ‘goodly heritage,’” said McCully.

McCully remembered the stories that her paternal grandmother had told her of their patriotic roots and that she might qualify for the DAR. Through much research she learned that she had six ancestors from the Revolutionary War and one from the War of 1812.

“To be able to put your ancestors in historical context made actual history come alive,” said McCully.

An active DAR Junior, McCully has paged for four years at both the Alabama and Georgia State Conventions and at Continental Congress. She serves on the State Junior Membership Committee and has worked on the Patriot Indexing Project, digitizing all DAR documents.

For her selfless volunteerism, devotion and service to the DAR, and outstanding professional work, McCully was awarded the 2011 DAR Outstanding Junior Award for the State of Alabama. Congratulations, Marla McCully!