Thumbs up for Jags after spring game 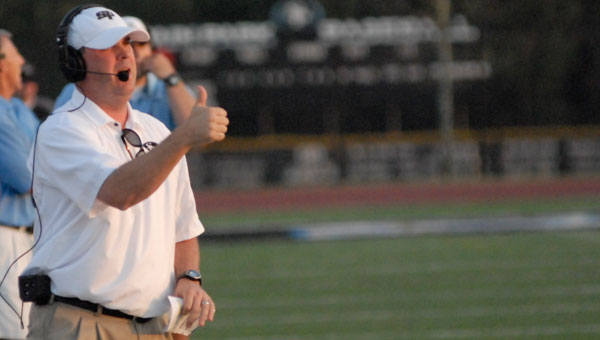 HOOVER — First-year Spain Park High School head football coach Chip Lindsey saw plenty of positives in his first look at the Jaguars in spring practice, which culminated with a 23-14 win over Robert E. Lee High School of Montgomery in a scrimmage May 12.

Lindsey was especially pleased with the play of quarterback Nick Mullens, a returning starter, in his first look at the rising junior. Lindsey, who coached quarterbacks at Troy University a year ago, was surprised with how easily the 6-foot, 165-pound gunslinger picked up his spread offense playbook.

“I really think you’ll see a lot of great things out of Nick,” Lindsey said. “For only five practices, he executed the offense really well.” 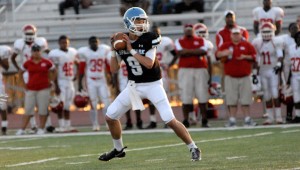 Mullens completed 13-of-17 passes, including his first 11 attempts, for 149 yards in the scrimmage. Mullens finished 8-of-8 passing for 63 yards as he led the Jaguars on a 10-play, 70-yard scoring drive on their first possession.

Running back Sean Mardis, a 5-foot-10, 175-pound rising senior, scored all three touchdowns in the scrimmage. Mardis, who became the first 1,000-yard rusher in school history at Shades Mountain Christian School before transferring to Spain Park, scored on all three of his touches and finished with 10 rushing yards.

Mardis gave the Jaguars a 7-0 lead following his 4-yard touchdown run with 8:29 remaining in the first quarter. Mardis put Spain Park up 14-0 with a 5-yard touchdown run just more than two minutes later with 6:18 left on the clock in the opening quarter.

Following a bad snap by Lee-Montgomery on a punt attempt, which gave Spain Park a 16-0 lead following a safety out of the back of the end zone, Mardis capped the scoring for the Jaguars with a 1-yard touchdown run. His 1-yard scoring run with 10:02 left in the second quarter gave Spain Park a 23-0 lead before Lee-Montgomery added two touchdowns in the second quarter with backups in the game.

The Jaguars’ first-string defense kept Lee-Montgomery off the scoreboard. Rising senior defensive back Devon Brown recovered a fumble on the opponent’s opening drive.

“It’s a great start,” Lindsey said. “We had a really good spring. We’re excited about having a lot of momentum to build on this summer.”