If you noticed eight young girls doing handsprings and backflips at the entrance of Riverwoods Subdivision, you would have surely been impressed with their enthusiasm and possibly attracted by the flavored lemonade and sweet offerings.

Blakely Stegall, 10, saw a story on the news about a child who had set up a lemonade stand with proceeds going to charity and was inspired to do that herself to raise money for the victims of Alabama’s April 27 tornadoes. 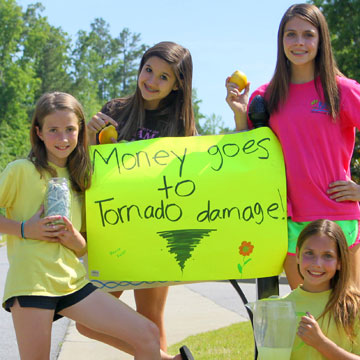 That Helena cares about their Alabama neighbors was also proved as a simple planned yard sale evolved into residents bombarding the old Winn Dixie parking lot with water, toiletries, canned foods and clothing.

“I had already gathered items for my yard sale when I decided to just donate all of it to those in need,” said Diane Thomas. “I asked for permission at City Hall to set up my car and two little tables, but I really had no plan.”

After the No Sleep in Helena blog posted Thomas’s location, contributions poured in like a very good virus running amok.

An efficient corps of volunteers plus Helena Explorers worked non-stop in the heat to sort, label and box donations.

ProStorage donated a truck to make the transfers to receiving points north.

Local radio stations broadcasted it beyond the community and by afternoon of the second day, Tim and Rhoda Trimble and Sue Cordell from Cornerstone Church had made contact with Thomas, to lead the collection effort forward to Sunday.

When I spoke to Thomas on May 10, she was in Tuscaloosa on a delivery and estimated that at least 12 truckloads have now been distributed. She and Tracy Williams are now focusing their attention on getting to the lesser-known communities, such as those in Hale County, where relief is still needed.

Jen Hall and husband, Wesley Henderson, model apron designs from her line of fabric creations, and Henderson shows off the... read more