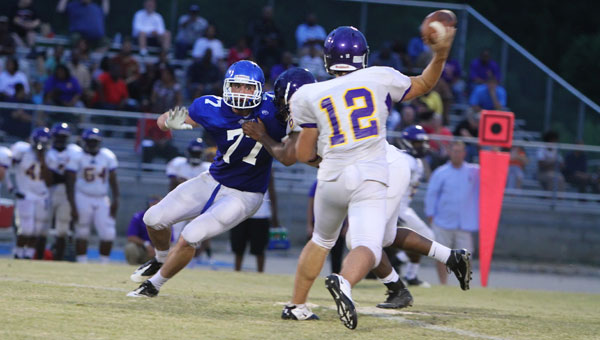 Waldrop saw the scrimmage as a way for his players to gain some perspective while helping out a community that had been hit hard with adversity in the past few weeks.

The Hornets used the scrimmage to provide hospitality and a hot meal for their visitors and make a donation to storm relief efforts in the community.

“We were all so lucky in Shelby County,” Waldrop said. 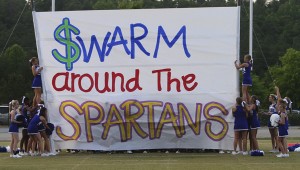 Chelsea High School cheerleaders hold up a banner in support of Pleasant Grove for the Hornets to run through before a scrimmage May 20. (Contributed/Cari Dean)

Waldrop was pleased with the Hornets’ effort in the 28-21 win over Pleasant Grove in the scrimmage.

Chelsea racked up 340 yards of total offense in the scrimmage. Penalties were the only negative Waldrop could pinpoint as the Hornets racked up 50 penalty yards in the opening half.

“It went well,” Waldrop said. “There were no injuries and we will be 100 percent healthy coming out of spring. I think both teams got what they needed out of it.”

Ganus scored on a 72-yard rushing touchdown on the third play of the scrimmage and added a 10-yard touchdown run early in the second half.

The rushing touchdowns were sandwiched by a 11-yard touchdown pass from Ganus to McCall.

McCall scored on a 75-yard touchdown run on the opening play of the scrimmage.