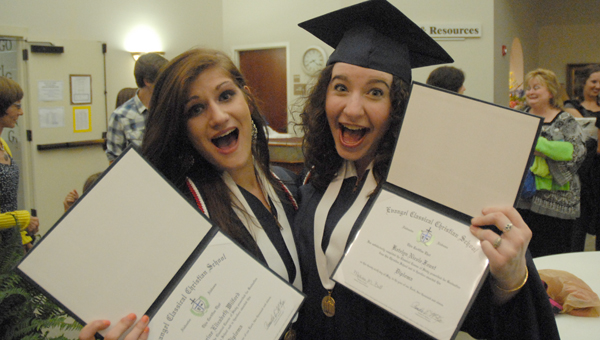 The Evangel Sanctuary erupted with laughter as Ellis looked down to the front pew, where 12 young men and women sat in caps and gowns.

Nobody was fooled by the general’s opening joke: all 12 seniors graduated with high academic achievements.

The Class of 2011 had an average ACT score of 28 and more than $1 million in combined scholarship offers. All will attend college in the fall.

And when they do, Ellis said, their values will be tested. Peer pressure, he said, will come from every direction.

He used an Alabama-Auburn football analogy to encourage the graduates to remain steadfast in their Christian faith while living in what he called an “unbelieving world.”

“You are going to feel like an Auburn fan in the middle of a big all-Alabama section at Bryant-Denny Stadium last November in the fourth quarter,” Ellis said. “You might be the only one. But as you sit there, guess what? You can know that you’re right. You can know that your team wins.” 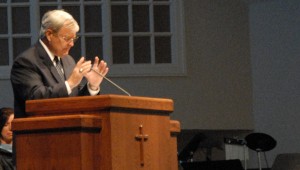 ECCS Principal Melissa Bell said the class was a blessing to the school.

“We are incredibly grateful to you all,” Bell said. “These seniors have been great role models for the other students.”

A video set to music was shown. It included a photo timeline of the lives of each graduate, showing them as babies to kids to graduates. The video elicited lots of laughter and had several in the audience wiping away tears. 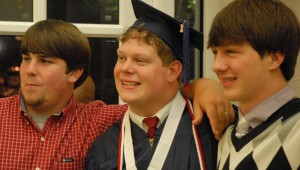 Andy Lucas (center) poses for a photo with his brother and cousin after receiving his diploma from ECCS. (Reporter photo/Brad Gaskins)

“There could never be a more diverse yet close-knit group of seniors,” Valedictorian Bethany Carter said. “It’s been said that if we had gone to public school, we would not have known each other. But thankfully we were placed here, and we know each other as close friends.”