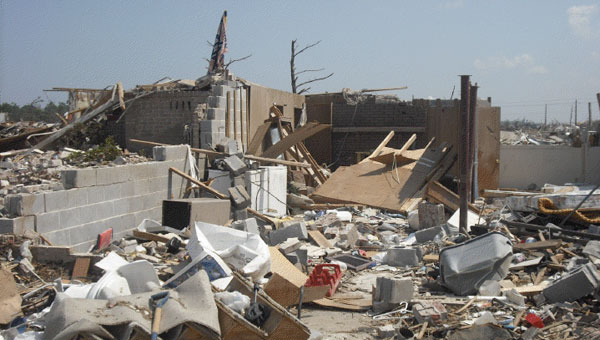 Meadow View Elementary second-grader Joe Toomey and his family took this picture in Pleasant Grove in early May after a tornado devastated the city. (Contributed/Joe Toomey)

A Meadow View Elementary School second-grader and his family in early May dedicated a day of their time to helping those hit hard by the state’s deadliest tornado outbreak.

Joe Toomey and his family traveled to Pleasant Grove on May 11 to help the residents of the town clean up and restore after the city was devastated by the storms.

The family left at about 8 a.m., and worked through the day to help sort boxes of donated clothes, unload donations off trucks and clean up debris throughout the area.

“They kind of just showed up and asked what they could do to help,” said Toomey’s second-grade teacher, Donna Hermecz. “One of the command posts up there pointed them in the right direction, and they let Joe work just like everyone else.”

Toomey worked alongside volunteers from several states, such as South Carolina, Texas and Minnesota, and he said the experience left him with a lasting memory.

“At first, I wanted to cry,” Toomey wrote in a PowerPoint presentation he showed to his classmates after he returned. “I saw cars that were stacked on top of cars and cars that were thrown inside of houses.

“I felt very blessed to still have my house,” he added. “It felt good to spend my time volunteering to help the people of Pleasant Grove.”

During his presentation, Toomey showed his classmates pictures of houses lifted from their foundations, yards full of debris and flattened cars littering the landscape.

He also gave the class a list of things they could to do help the storm victims, which included donating items, donating money to the Red Cross, helping victims clean up the damage and saying prayers for the families affected.

“I’m sure it helped them to see how bad it really was, because these were pictures Joe and his family took while they were there,” Hermecz said of Toomey’s classmates, noting Toomey has a “heart for helping others.”

“He (Toomey) probably had a lot to do with them going up there to help in the first place,” Hermecz said. “He may have missed school, but I’m sure he learned several valuable lessons in life.”