Steve Holt, Montevallo’s chief of police, called me the other day and told me that if I would be at Ida’s Country Kitchen at 7 a.m. the next morning, I just might get a funny story.

Well, we didn’t get the exact story we expected, but we had a fun morning. The attraction was that the café had challenged customers, promising that if they ate all of a 5-pound $25 breakfast omelet in 12 minutes, they could have it free.

Charlie Stano, a Montevallo dispatcher and favorite at the police station, boasted, “I’ll have no trouble with that.” 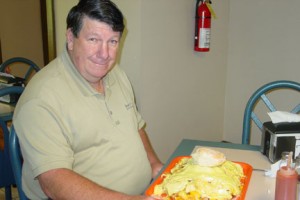 His policemen friends, Jonathon Oliver and Jason Thrash, backed him up – they had seen him put away a lot of food. Oliver, due to his trust in the ability and capacity of his friend, promised to pay the $25 if Stano failed.

When that breakfast came out of the kitchen, Stano’s eyes became as big as saucers. We were all amazed at the size the platter piled high with 10 eggs and lots of cheese, bacon, sausage, ham, potatoes, tomatoes and a very large biscuit. It would probably have fed a hungry football team.

Stano made a valiant effort amid encouraging cheers from the onlookers. He stuffed the food down and even tried to push it down with three big glasses of milk, but finally he had to give up.

“They’ve always called me ‘the biggest eater,’” he said, “but maybe I can’t eat as much as I used to.”

Oliver didn’t mind that he lost the $25; Stano’s try was hilarious, and he, Oliver, was working his last day with his buddies in Montevallo and needed something special to mark the occasion. In a few days, he would be headed to Afghanistan to work for the International Police Force where he will teach the Afghans how to police in a democratic society.

Stano has worked for 35 years as a Montevallo dispatcher and jailer, and many friendships in the department have grown as strong as his and Oliver’s. Some days have been as challenging as eating the omelet and some days as laughable.

Ida’s Country Kitchen is located at 4781 Shelby County 25, and is operated by Shelia Ammons and her sons. Jeffrey Ammons came up with the idea for the omelet challenge and he has modified it to allow 20 minutes. He decided if Stano couldn’t handle the 12 minutes, there was no chance for anyone else. Jeffrey is also working on plans for a hamburger contest and a new menu that will include specialties using customers’ names.

Grief knows no boundaries, and help is available