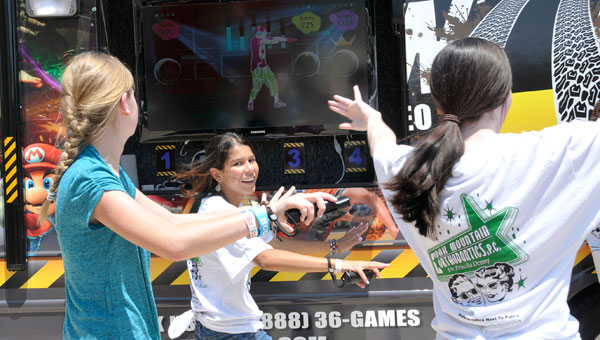 It was a sunny afternoon filled with old-fashioned games such as Dunk the Teacher plus 21st century entertainment with the Ultimate Interactive Party Experience where the Funk Soul Brothers were jiving with dance-along fever.

Student Grant Beard said he was admittedly nervous about his first date with Maddie Crain to a real dance. After dinner and a slideshow presenting memories and highlights of the school year, during the awards presentation, Beard found himself the recipient of the Outstanding Student in Algebra and the Business Education Achievement Award. Beard said he plans to go into biomedical and biochemical engineering.

Crain was unexpectedly encouraged to the stage by her friends to sing her rendition of Taylor Swift’s, “We Are Who We Are.” Crain and Beard’s favorite song at the dance was Back to December.

Each eighth-grade teacher gave four awards in the following categories: Citizenship, Most Dedicated, Most Enthusiastic and Outstanding Student in Subject Area.

Assistant Principal Scott Knight was dubbed “The Sherlock Holmes of HMS” and Principal Jenni Goolsby “Most likely to say, ‘Tuck it in!’ or ‘Pull it up!’ ”

Lisa Hare, PTO president, though not officially acknowledged with an award, received kudos from grateful parents for her time volunteered, along with other contributing moms, to make a year of excellent memories

Math teacher JaNae Bozeman said, “This year’s class was a fun group, joining me in the hall on Friday mornings dancing to ABBA’s Dancing Queen. Dru Perry was my devoted dance buddy.”

“On the other hand, this class was a challenge as well. Let’s just say they kept us all on our toes,” she said.

Bozeman was keeping cool on Panther Day by spending most of her time being dunked by softballs aimed at the target spot by accurate young hands.

Memories? They have a few.

“Goofing off and getting away with it,” said Meri Cashion.

“Dancing at pep rallies and hanging out with friends,” said Stephanie Deleonard.

“This was my first year at HMS,” said Dexter Brown who transferred from Berry Park. “I will always remember the first day of eighth grade, when everyone stood up and clapped and welcomed me.”

Helena turns out to help find a cure

In the foreground as the Survivor’s Lap was under way are Sara Turner, 6, and her cousin, Lauren Danley, 8.... read more