Jag taken in final round of MLB Draft 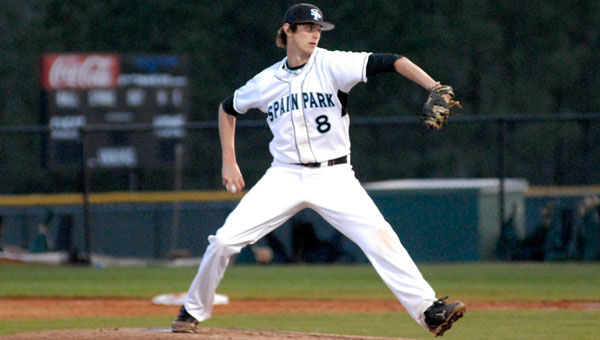 Spain Park High School senior Chris Ellis was drafted by the Los Angeles Dodgers in the final round of the 2011 Major League Baseball Draft on June 8.

Ellis, who signed a letter-of-intent to play baseball at the University of Mississippi last November, was drafted by the Dodgers with pick No. 1,514 in the 50th round of the draft.

Ellis became the first baseball player from Shelby County selected directly out of high school in the MLB Draft since Alvin Hines of Pelham was drafted by the Washington Nationals with pick No. 1,492 in the 50th round in 2009. Hines turned down a contract offer from the Nationals to play college football at Samford University.

“I’m really excited,” Ellis said. “It’s a great honor. There are a lot of players they could have picked and they picked me.”

Despite being drafted by the Dodgers, Ellis said his plans are to enroll at Ole Miss in the fall and suit up for the Rebels next spring.

Ellis, a 6-foot-4, 190-pound right-handed pitcher, posted a 4-3 record on the mound with a 2.97 earned run average in 37 2/3 innings as he battled injuries during his final season with the Jaguars. Ellis made 10 appearances for Spain Park as a senior.

Ellis, who struck out 50 batters and limited hitters to a .207 batting average during his senior season, earned his final win at the school in the Jaguars’ 15-3 win over Minor in a doubleheader sweep April 22 in the opening round of the Alabama High School Athletic Association Class 6A playoffs.

Ellis allowed one earned run without giving up a hit with five strikeouts and a walk in 3 2/3 innings on the mound.

Ellis, who also played third base at Spain Park, finished his senior season with a .365 batting average and two home runs while driving in 36 runs.

Ellis, who limited batters to a .216 batting average against him as a junior, earned a win against Tuscaloosa County in the opener of a best-of-three series in the first round of the AHSAA playoffs April 16. Ellis allowed just two earned runs on five hits with five strikeouts and a walk in a complete game.

Ellis pitched a one-hitter with seven strikeouts in the Jaguars’ first AHSAA Class 6A, Area 10 game of the season March 4 against Thompson.

Ellis finished his junior season with a .349 batting average and two home runs while driving in 28 runs.