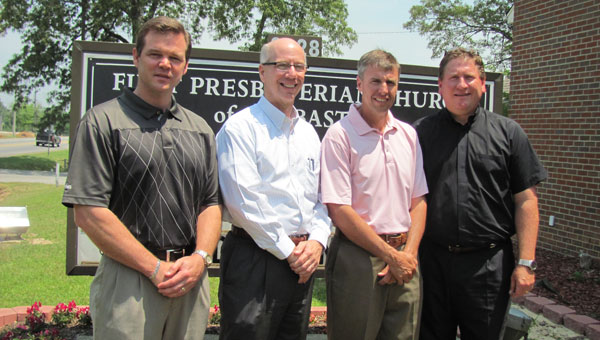 Reverend Mark Davenport of the First Presbyterian Church of Alabaster (formerly Elliottsville) is an avid golfer and quickly found his congregation had several “golf nuts.”

Beginning in 2005, FPCA took one team to the tourney. In 2009 they began taking two teams. Serious planning got underway in January with airfare, reservations, Lake Hamilton house rental and SUV rental on the planning agenda.

The team of Mark Davenport, Mike Allen, Tim Blackmon and Jeff Thames won the championship flight of the tournament in 2005 and 2011. Their team has finished second once, and third three times.

Pastor Davenport, an old Arkansas Razorback, is father to six children (four girls and two boys). Four are in college, one lives in Mobile and the youngest is at Thompson High School. Davenport is a Bethel College graduate and received his graduate degree in theology from Memphis Theological Seminary. He has served pastorates at Sharon, Tenn., Paris, Ark., Marshall, Texas and Concord, Texas.

Mike Allen, product of Alabaster Lee and Allen families, is a third-generation member at FPCA. He has the distinction of being the youngest member ever called to serve as an elder for the church.

Allen has been a deacon, Sunday school teacher of children, youth and adults, is an ardent Auburn fan and graduate and holds a degree in electrical engineering from that university. He travels a good deal for his employer, Alabama Power. Allen serves on the personnel and finance board for the denomination. He is father to one son and one daughter.

Tim Blackmon, vice president of Comframe Software of Birmingham, played football for Georgia Tech, is father to a son and daughter and is a 15-year member at FPCA. He loves hunting, fishing and football. He too has served as elder and deacon and has served on various committees of the church.

Jeff Thames, Thompson High School and University of Montevallo graduate, is a local self-employed landscaper, has taught children’s Sunday school, worked with the youth on several occasions, serves on the grounds committee, hosts the annual Easter egg hunt, has served as elder and deacon and is active in men’s fellowship. He is the father of two sons who are fourth-generation members of FPCA.

It goes without saying that behind each of these men is the support, love and help of wives Tracy, Marcia, Rachel and Amy.

Golf is definitely not the center of these men’s lives, but to these church buddies it is relaxing, competitive and fun.

Harmon Acker a man of faith