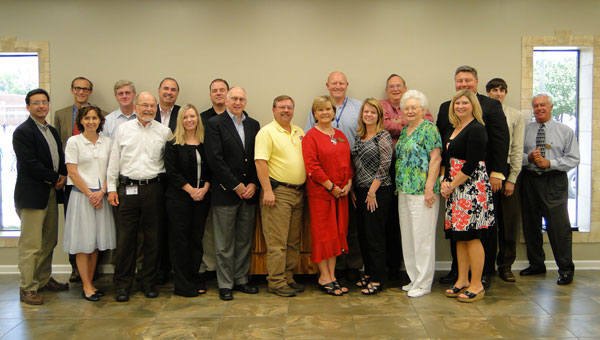 Forty years ago, Columbiana residents J.D. King, a 26-year veteran firefighter, and wife Bobbi began collecting firefighting artifacts that include historic fire apparatus, toy and fire memorabilia and historic firefighting tools. They built a 5,000-square-foot building to store their treasures, as well as filling their basement.

Speaking to Calera chamber members May 17, County Manager Alex Dudchock described meeting with the Kings in November 2009 in which they offered their collection to the county.

“Initially, I recalled a fire engine the Kings brought to a Pilots Association Christmas function and thought ‘Wow! One of their artifacts is a fire truck — singular,’ ” Dudchock said, as laughter filled the room.

After reaching an agreement to establish a fire museum in Shelby County, Dudchock sent a request for proposal to cities in the county. Two responded — Calera and Pelham. After a year and half of meetings and visiting neighboring fire museums, Calera was chosen. A partnership agreement was then signed between the Kings, Shelby County, City of Calera, and Calera Chamber of Commerce. J.D. thanked Mayor Graham, Alex Dudchock and “the little torpedo” Gail Blankenship for staying on top of things.

“Bobbi and I are making the donation to preserve the history of firefighting, teach children about fire prevention and enhance people’s knowledge of what firefighting is all about.”

Dudchock gave an overview of funding for the project.

“Twelve years ago, the county began aggressively saving lodging tax funds for capital improvements that impacts tourism. American Village, University of Montevallo, Oak Mountain State Park and other venues that generate bed night stays have benefited from the fund. The Heart of Dixie Railroad has been a recipient for more than 18 years. The desired outcome is for people travel to our county and stay overnight to visit other attractions,” he said.

Possible first phase themes include: firefighter history, fire apparatus, fire safety and prevention, toy collection and holograms. The University of Montevallo has been engaged to research the history of firefighting. The chamber office will relocate to the museum. Rooms for special exhibits and general assembly space are planned. The project is located on Alabama 25, adjacent to Chevron. First phase cost estimate is $500,000 to $600,000, but could reach $900,000. Size is undetermined, 12,000-18,000 square feet, ultimately reaching 30,000-40,000 square feet.

Dudchock hopes to announce a tentative grand opening date by August. Mayor Graham stated the project will be a gateway to the old historical district of Calera.

Blankenship, Calera chamber executive director, stated this is growth opportunity for both Calera and Shelby County.

“People can get off exit 228 and visit many attractions within a 20-mile radius,” she said.