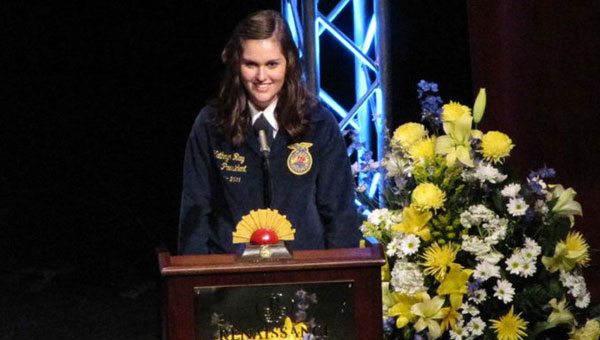 During the Alabama FFA State Convention in Montgomery, Ray passed through nine interviews and written tests to achieve her newest title. She served Montevallo High School’s FFA chapter as president this past year, but will move her leadership to a state level throughout her senior year.

“I decided to join FFA when I was in eighth grade. I went to Farm Day and wanted to get out of school one day a year, so I joined FFA my freshman year,” Ray said with a laugh.

Former FFA supervisor Keith Adair encouraged Ray to write a speech for the Alabama convention, and she won third place out of 27 competing counties. She then ran for chapter office and was named secretary her sophomore year. She became the chapter president and central district vice president her junior year.

“It hasn’t hit me yet,” Ray said of her district presidency. “I didn’t think I was going to get president. I don’t remember it. All I did was take a three-hour nap when I got home.”

In addition to her senior-year studies, Ray will travel around the state speaking at the Alabama agriculture teacher’s convention, training district officers and supervising those officers train chapter officers. She will also be traveling to Washington, D.C., in July to meet President Obama, Hilary Clinton, Condoleezza Rice and others.

Ray said she will be planning out next year’s state convention.

“I don’t come from an agricultural family, and I’d be the first to tell you that,” she said. “Shelby County is the wealthiest county in the state, and I want to help students become more aware. I didn’t realize how important it (agriculture) is until I started researching.”