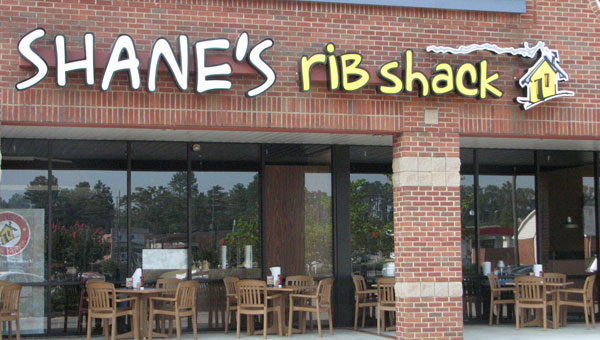 There’s a new set of ribs in town. Shane’s Rib Shack is located at Valleydale Road in the Winn-Dixie Shopping Center.

Shane’s ribs are so good it makes me proud to say God made me from one.

They’re that good! If Adam had known God could make a woman from his rib or put Shane’s granddaddy’s secret sauce on it and serve it up with a couple of Shane’s delicious sides, we might not even exist.

Shane’s Rib Shack originated in Georgia and has been in business for nine years with franchises being sold for seven. Our location is in Indian Springs at the intersection of Valleydale and Caldwell Mill Roads.

Shane’s Rib Shack is the “fastest-growing BBQ restaurant concept in the nation,” and was honored by “Inc. Magazine’s 5,000.” They have 68 locations in 13 states, and my sons and I are proud that one of them sits just down the road from our home.

Shane Thompson and his wife, Stacey, started the franchise with hard work and Shane’s grandfather’s secret BBQ sauce recipe. I don’t know what the secret is, but it’s a good one.In addition to their hickory-smoked ribs, they have barbecue chicken, chicken tenders, a variety of wings, sauces and salads with more “pork” than all the politicians in Montgomery combined.

They have tons of vegetables and a peach cobbler that I hear is to die for – though I have yet to try it. I figure if I don’t try it I can’t eat it – a good way to diet.

Then again, if I were dieting too much I wouldn’t be going to a rib shack would I?

General Manager Nick Gaspers and local owners Ron Woodis and Carl Hess should be happy with the crowds their restaurant has attracted since its debut. They are open seven days a week with indoor and outdoor dining available.

Visit their website at Shanesribshack.com and check out their menu, then pay them a visit with your family and friends. It’s a great, centralized location to meet and eat. For more information on Shelby County’s newest barbecue haven, call 874-6888.

I am embarrassed to say how many times I have been there already, but only once was enough to know that Shane’s Rib Shack is going to be a big hit in Shelby County.

John Wesley: a priest and a painter

The Rev. John Wesley talks about one of his paintings. (Contributed) By CATHERINE LEGG / Community Columnist The beautiful watercolor... read more