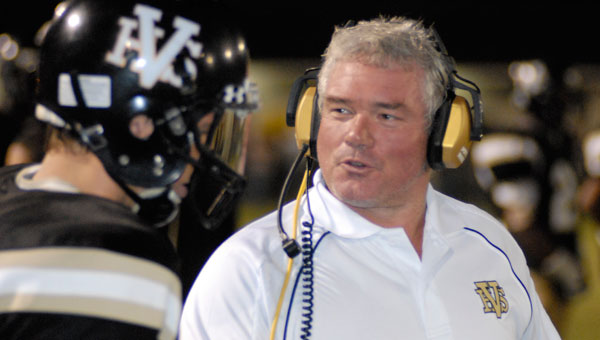 Vincent High School has named Anthony (Zeb) Ellison as the school's new head football coach following the resignation of Dwight Spradley (Above), who led the Yellow Jackets to a 38-56 mark in 10 seasons at the helm. (File)

Spradley plans to continue serving as the school’s head baseball coach next season.

Vincent Principal Gary Minnick said he is pleased to have Ellison leading the program.

“We’re just excited about the potential and building on what Coach Spradley did here,” Minnick said. “We’re excited that (Ellison) is coming back home. We’re glad to have him.”

Ellison, who temporarily served as an interim head coach at Pike County in 2010, has also coached at Alma Bryant High School in Irvington, which is near Mobile, and Citronelle High School. Ellison played collegiate football at the University of West Alabama following a decorated career as a linebacker at Shelby County. Ellison, who graduated from Shelby County in 2000, began his collegiate career at Bethel University in McKenzie, Tenn.

Ellison helped Pike County finish with an unblemished 9-0 mark in the regular season in 2009. Pike County dropped its first game of the 2009 season in the first round of the Alabama High School Athletic Association Class 3A playoffs.

Different paths lead to Player of the Year