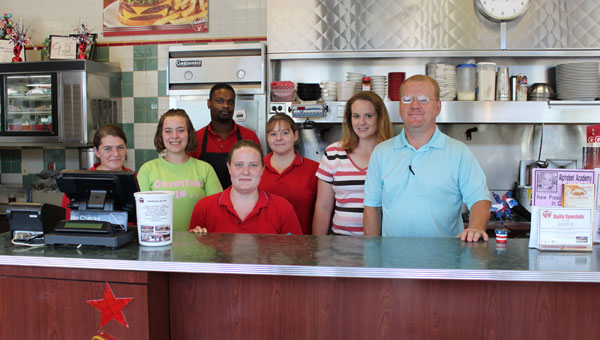 CHELSEA – When Shelby County Huddle House owner Doug Norton saw the complete devastation of a Huddle House in Rainsville after the April 27 tornadoes, he immediately knew he wanted to help the employees get back on their feet.

Norton owns Huddle Houses in Sylacauga, Harpersville and Chelsea. He said he took the weekend after the tornadoes to brainstorm about his plan, and began contacting his stores’ managers the following Monday.

“We started collecting (food and money) and put up signs. It was like a food drive at first,” Norton said. “The Chelsea location collected three to four times more (than the other locations) due to the generosity of our people. And when I say ‘our people,’ I mean our employees.”

Christi Johns, manager of the Chelsea Huddle House, said she was proud of her employees for giving over and above.

“Everyone (the Chelsea employees) has kids and babies, so people were giving little, personal things that maybe they don’t need, but was nice to have,” Johns said. “Our employees gave soap and cleaning supplies, and just went and bought whatever could be used.”

Norton said he had never seen anything like his employees giving out of their own pockets for the victims.

“Employees took money out of pocket and went to Walmart to buy a buggy’s worth,” he said. “It’s not just about the money, but about the lengths they went to that moved me the most.”

Norton took a truck full of supplies to Rainsville after collecting for four weeks. He said he wanted the supplies to be specifically for Huddle House employees first, then for whomever else needs them.

According to Norton, Huddle House Corporate matched the cash donation given by Norton’s stores. Norton said he was able to give around $5,000 worth of food, supplies and cash to the Rainsville Huddle House, as well as a donation to a Huddle House in Hanceville.

“They (the employees) worked all day to work for us, then they went and bought a buggy full of supplies at Walmart. I’ve never seen anything like that,” Norton said. “Anyone can throw $25 and say give it to whoever needs it, but the employees found time to go do this.”

Bart Johnson is led to a Shelby County Sheriff's Department vehicle after being sentenced to death on June 16. (Reporter... read more