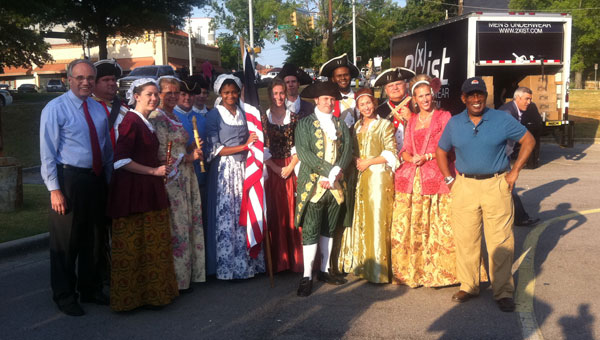 Tom Walker, American Village’s founder and CEO, and about a dozen staff members and volunteers of the American Village arrived on the set of Roker’s segment in their colonial-era clothing at 4:15 a.m. on Thursday, June 16.

The first hour of the show highlighted Community Kitchens of Birmingham, a non-profit food kitchen in the heart of the city. The American Village wasn’t associated with Community Kitchens, but was chosen by NBC as a local highlight.

“Rightly the focus was on the good work of the Community Kitchens,” Walker said. “We were just pleased to be part of Al Roker’s segment that showed a very quick glimpse of Alabama.”

Roker and Deen stood with the American Village staff as Roker introduced the Village as a place that teaches young people about American history. The Village staff then took the stage to present a short vignette saluting American independence.

“It was a very brief segment — just a quick video introduction to a place in Alabama that teaches about our Nation’s liberty,” Walker said. Even though it was a very short segment, it’s been great to get some calls and comments from people elsewhere who saw it. I also received an email from a teacher who said, ‘I just saw some of my favorite people (referring to our interpreters).’”

Patrick Henry, portrayed by the American Village’s Officer for Interpreted Programs William Stewart, began the vignette by saluting America’s Declaration of Independence. Next, three colonial-era soldiers, led by Military Interpreter Christopher Long, fired their muskets in salute, and six interpreters began a historical dance. Dr. Lori Ardovino of the University of Montevallo and other musicians accompanied the vignette.

“Personally I am always gratified to see our staff engage our visitors,” Walker said. “And I was very happy that yesterday they were in front of NBC television cameras as they introduced the America to one if its national treasures right here in Shelby County.”

Girls show off their carpentry work June 17 during the final day of the "Girls Can Construction Camp" at Shelby... read more