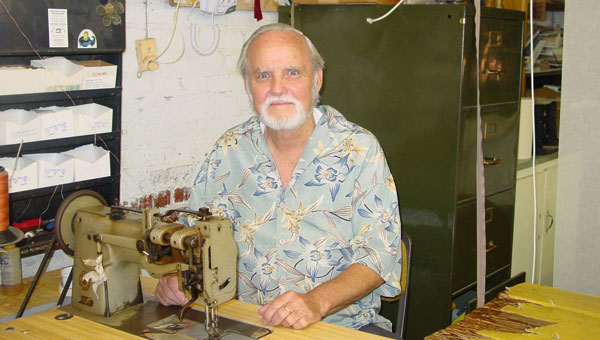 When you need to find James Walker, the best place to start is in his old chair at his sewing machine at Walker Upholstery in the basement of his building on Main Street.

Maybe it’s not the same chair or the same sewing machine, but it’s the same James who’s been working there for more than 60 years. He says that he officially retired two years ago and turned the business over to his son-in-law, Rick Maddox, but how can you believe the man when he so often can be found still stitching away or fitting material over a chair or sofa? When we asked why, he smiled and admitted that he loved the work the day he started in 1948 and still loves it. That love is reflected in his work and supports his reputation of being “the best in his field.”

When he was asked how he built that fine reputation, James admitted, “I believe in giving something away everyday; it makes me feel good and satisfied. You have to satisfy yourself before you can satisfy others with your work or in any area of life.”

James’s first job was with Vulcan Furniture Manufacturing, where he worked until ’58 except for a two-year stint in Korea as an army medic.

On leaving Vulcan, he came to Montevallo where he set up shop in a little building adjacent to Garrett’s tire center. During the next few years, he occupied three buildings on Alabama 25, and in ‘72 purchased the building on Main Street where Walker Upholstery is still located.

Although he worked steadily all those years, he did leave the sewing machine for about a month each year when he and his wife, Billie, traveled out of the country. Their favorite jaunt was to Mexico where a relative had houses in Acapulco near the ocean and in Taxco in the mountains.

They don’t travel much anymore, and James does not work as much as he used to, but they enjoy an active family life. Their 13-year-old great-niece, Madison Cristwell, lives with them and their daughter, Rhonda “Dinkie” Maddox, lives in Montevallo. Their sons are Ricky, who is an upholsterer in Garden City, and Robert, who just finished eight years in Afghanistan doing private security work. The Walkers also have four grandchildren and two great-grandchildren.

“Respected” is a good word when describing James Walker, and Billy Hall, a nephew who has worked in the shop for 24 years said it best, “He is a good man, and it is an honor to work with him.”

By SHELBA NIVENS / Community Columnist Lance Corporal James I. Wilson, Jr. has been deployed to both Iraq and Afghanistan.... read more