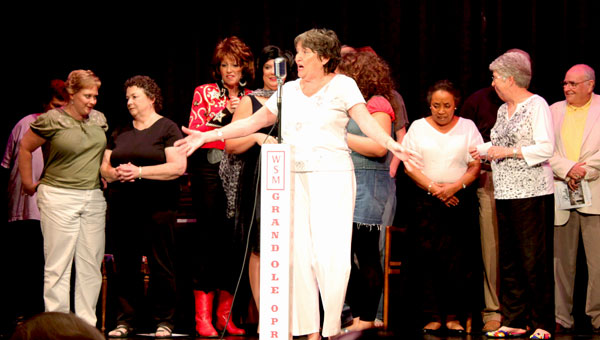 MONTEVALLO – As schools integrated in 1971, citizens of Montevallo wanted to find a way to bring their community together. The Montevallo Parent-Teacher Association put on “A Womanless Wedding” before a full house at the University of Montevallo’s Palmer Auditorium, and thus began the inception of the Montevallo Main Street Players.

“It was so much fun, no one wanted to quit,” she added.

During the 40th anniversary gala on June 18 in the Parnell Memorial Library Theatre, Main Street Players, both past and current, reenacted favorite scenes from a handful of the 65 plays produced by the theatre company, including “A Doll’s House,” “The Odd Couple,” “Steel Magnolias,” “Nunsense” and “Always … Patsy Cline.”

“We primarily wanted people to understand how and why we began,” Hughes said of the gala.

“Art is a wonderful vehicle for bringing people together and it worked,” Hughes said.

For more information on the Montevallo Main Street Players, visit Montevalloartscouncil.org/mmsp or contact Elaine Hughes at 665-7757.