ISS choir to perform in Romania 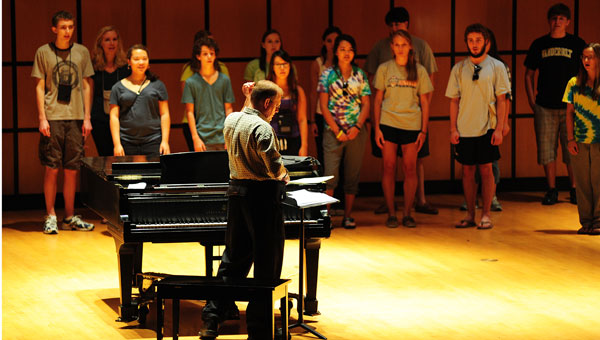 The Indian Springs School Chamber Choir held its last rehearsal on June 17 before leaving for a week-long tour of Romania to perform at the Romanian-American Music Days in Sibiu and throughout the country.

Director of Music Dr. Tim Thomas leads the choir, which is comprised of 50 students from ages 12 to 18.

“This is a very special group,” Thomas said. “They have a wonderful spirit. It’s a pleasure to work with them.”

Thomas said the choir will sing songs in German, Romanian, French, Italian and an African dialect.

According to Kieve, Alabama Symphony Orchestra Concertmaster Daniel Szasz and the Sibiu Philharmonic Orchestra started the festival to promote American music and foster relationships between Romanian and American musicians.

“The students now have the chance to share their own diplomatic efforts,” Kieve said. “This is a great example of reaching across to another country.”

Kieve said Szasz is parent to an ISS alumnus and student, and his wife, Dr. Alina Voicu, is ISS director of instrumental music and accompanist to the school’s choirs.

Indian Springs alumnus and U.S. Ambassador to Romania Mark Gitenstein and his wife, Elizabeth, hosted a reception June 19 for the choir, ISS alumni and guests touring the country, Kieve said.

“We’re a community that values diversity,” Kieve said. “To be a part of an effort to bring cultures together is a continuation of what we do at our school.”

Kieve said the ISS Chamber Choir performed in France two years ago. The choir has also performed in China and at the International Society for Music Education in Dijon and a combined performance in Vienna with the Vienna Boys Choir.

“We’re very proud of the chamber choir and excited for them,” Kieve said. “I think it’s an experience that will stay with them for a long time.”