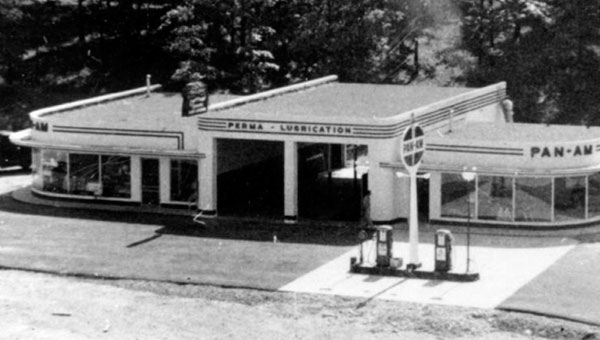 In the early 1950s, the Pan-American gas station on U.S. 31 in what is now Pelham served as one of the few stops between Birmingham and Montgomery. Today, the building houses Riverchase Carpet and Flooring. (Contributed/Shelby County Historical Society)

When Clyde Pearce entered what is now Riverchase Carpet and Flooring near the intersection of U.S. 31 and Valleydale Road in 1995, he found a run-down building filled with junk of all types.

But, more importantly, he saw a building with a character unlike any other buildings surrounding it, and a history pre-dating its city by nearly 20 years.

“I just liked it. I liked the way it looked,” said Pearce, who currently owns the building.

The building, which features an art deco style, large display windows and a curvy design, was constructed in the early 1950s to serve as one of the flagship service stations for the Pan-American oil company.

It was one of the first buildings constructed on U.S. 31 after it was expanded to four lanes through the region, and was owned by the Acton family for decades.

When it was constructed, the center of the building housed a pair of large service bays, the northern wing served as the station’s offices and the southern portion of the building contained a full-service restaurant.

Colored stripes surrounded the top of the building, signs reading “Pan-Am” and “Perma-Lubrication” identified the station on each end and a pair of gas pumps stood in the parking lot.

At the time, the station, which is now flanked by several other buildings, such as a Milo’s Hamburgers and an IHOP restaurant, served as one of the only stops for motorists traveling on U.S. 31 from Birmingham to Montgomery.

“I can remember a lot of people stopping here to eat breakfast before they went south to go fishing,” Pearce said with a laugh. “The next gas station was way down in Alabaster.”

After its days of serving as a gas station came to a close, the building housed a recreational vehicle company for several years before it fell into disrepair.

When Pearce purchased the building at an auction in 1995, Pelham officials urged him to demolish the aging structure and start from scratch.

“I knew I could fix it,” Pearce said, noting some parts of the building’s roof had caved in when he bought it. “When I got done restoring it, the city was thrilled to death with what we were able to do.”

Today, the building, which remains mostly unchanged from its original form, houses Riverchase Carpet and Flooring. The city of Pelham recently awarded the company its commercial beautification award for June.

“When I bought the company (in 2006), some of the other flooring companies were calling it ‘that old gas station on the hill,’ almost in a derogatory way,” said John Wilson, president of Riverchase Carpet and Flooring. “But it does have character, and I like that.

“Pelham is a young city, and there aren’t a lot of buildings that go back before Pelham existed,” Wilson added.