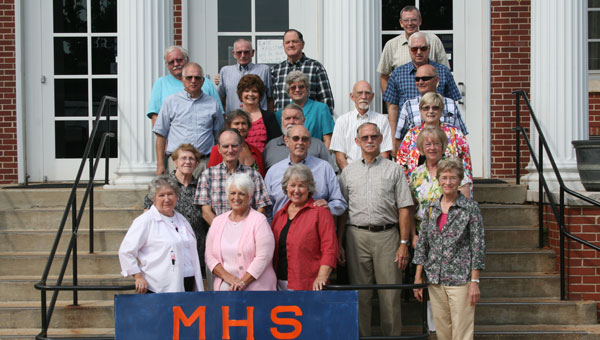 Members of the Montevallo High School Class of 1961 joyfully renewed old friendships at their reunion on June 18. The last 50 years just fell away as they shared memories of those happy, carefree school days.

There were 63 members in the original class, but 19 of those are deceased. The 27 who attended the reunion came from as far away as Texas, Louisiana, Georgia, Florida and from all over Alabama to spend the day celebrating with special friends. As Judy Kellum jokingly put it, “We had a very enjoyable evening; just a bunch of old folks getting together to remember ‘when.’”

The day began with a gathering at the high school where they visited the classrooms and shared memories of the subjects and the teachers who taught there. Among others, they remembered Vinnie Lee Walker, Susie Dement, Principal Guy Milford, Ann Milford, Coach Charlie Martin and band director Victor Young. They noted, too, that Emily Pendleton was a new teacher that year.

As the group entered the theater, they remembered that when they were in school, the theatre was a gym where the basketball games were held and where they had such fun dancing the “twist,” during lunchtime, to songs of the ‘50s and ‘60s coming from the turntable that sat in the corner.

Of course they talked, too, about football, and how, in their graduating year, MHS won the state football championship for the first time. After the tour of the high school, the group moved on for dinner at the Main Street Tavern. Glenda Cairns commented, “Those good people, Jeff, Jim and Mama Webster, welcomed us with open arms and a generous buffet of fine food.”

The evening ended with dancing (perhaps a little more sedately than in ’61) to the music the classmates remembered and loved, played by Dudley’s Players of Columbiana.