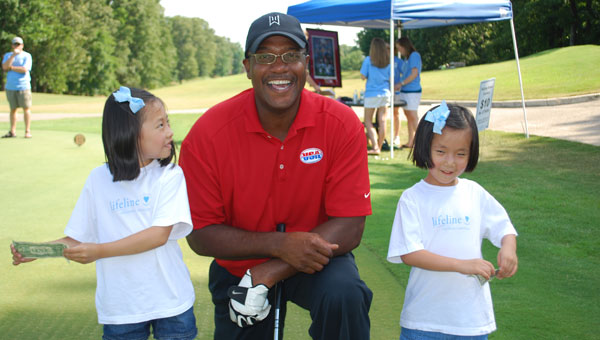 This year’s Lifeline Children’s Services 5th Annual Celebrity Golf Tournament was a huge success, raising $55,000 according to Doug Acton, chairman of the board of directors. Played on Greystone Country Club’s Founders Course, the tournament hosted 20 celebrities and a total of 120 players for a great cause.

Lunch was catered by Jim ‘N Nick’s followed by an early evening steak dinner provided by RSA Foods. John Croyle was the auctioneer for the afternoon’s festivities and talked his way into the pockets of many of the golfers for additional donations for Lifeline. With beautiful weather, a great golf course and equally great food, fellowship and fun, the tournament was a “ball.”

Winners of the tournament were the McGriff, Seibels and Williams’s team which included Rob Freel, Mike Holmes, Stephen Bosley and Al Del Greco. However, the biggest winners of all were not the foursome, but the 1,000 children who have been adopted domestically and the 2,500 internationally through Lifeline over the course of their past 30 years of service.

Lifeline Children’s Services continues its ministries to families here and around the world. Its primary mission is to give children “a hope and a future” which is based on Jeremiah 29:11 – “For I know the plans I have for you declares the Lord, plans to prosper you and not to harm you, plans to give you a hope and a future.” (NIV)

For more information on its services or how you can volunteer with Lifeline, please call 967-0811 or visit Lifelineadoption.org.

Students from across the state assemble on the steps of Reese Phifer at the University of Alabama following the Alabama... read more