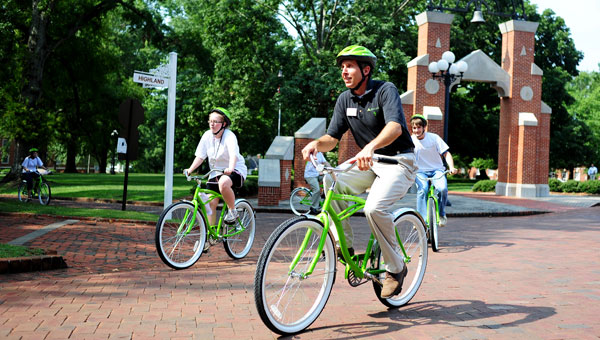 MONTEVALLO – Members of both the Montevallo community and the University of Montevallo came riding into campus on 20 bright green bicycles on July 8.

UM professor and city councilmember Dr. Hollie Cost donned a bike helmet and pedaled through the pack to kick off the Montevallo Bike Share Initiative in front of UM’s Carmichael Library.

“That we know of, this is the first bike share between a city and a university,” Cost said. “It promotes a healthier lifestyle and less traffic in Montevallo.”

Aaron Traywick, the student coordinator for the bike-share program, said members of the community have donated 30 additional bikes to the program.

“We hope to do a great deal of good in helping to combat the problems of public transportation that a great deal of our citizens have to contend with on a day-to-day basis,” Traywick said. “To that end, our program will also be as affordable as possible, with a yearly membership fee not to exceed $35, to recoup program expenses.”

Dr. Carolyn Miller-Kirby, a kinesiology professor at UM, said the program will be a service learning opportunity available to her students. She said her students will hold safety seminars at local schools and perform weekly bike maintenance on the donated bikes.

The green bikes were donated by Montevallo’s Regions Bank branch and put together by the Montevallo Rotary Club.

Self-professed bike enthusiast Ken Jones, Regions Montevallo branch manager, said he looks forward to seeing the bikes around the campus and around the city.

“You know it’s going to be a good day when you start off with a bike ride,” Jones said. “We had our own Tour de Montevallo going on this morning.”

Bikes will be available for rent from three hubs around the city — UM’s Carmichael Library, the Parnell Memorial Library and the Montevallo Police Department after the official kick off on Sept. 1.