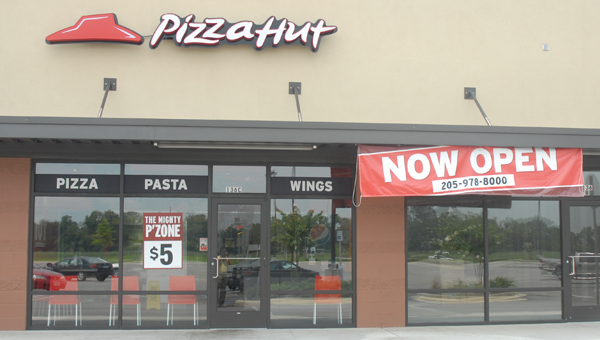 CALERA – Calera residents with a taste for pizza have a new option to get one of their favorite foods.

Pizza Hut has opened a location at 136 Marketplace Circle Suite C, just off Alabama 70 next to the Publix.

The store opened June 8 and does delivery and carryout orders only.

“The good folks of Calera have opened their arms to us,” Plain added. “It has so far exceeded are expectations.”

The store offers pizza delivery to most areas of Calera.

“We had people stopping by well before we opened just to welcome us to the area, just letting us know how excited they were that we were coming in,” Plain said.

Heather Perry is the store’s general manager. She was previously the general manager of the Pizza Hut in Helena. Jarod Edwards is the shift leader for Calera.

Being located next to Publix has been beneficial to Pizza Hut, Plain said.

“We’re very pleased with the location,” he said. “Having Publix as a neighbor has been extremely beneficial with the traffic they have.”
Plain said the bulk of the staff for the Calera store has already been hired. However, he added, Pizza Hut is “continuing to look for good people.” Those interested in working there should complete an online application, he said.

Logan Crook of the Columbiana Post 131 team heads to third base during a game against Dothan in an American... read more