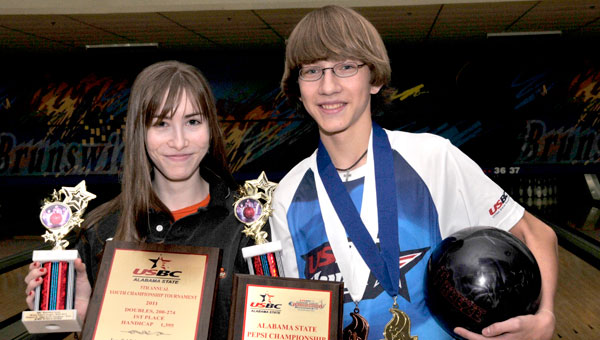 Sarah Strickland, league coach for the home school program at Riverview Brunswick Lanes, helps Joe Schlicter balance the assorted trophies, plaques and medals he has won in his bowling efforts since February. (Contributed)

Joe Schlicter recently surprised his parents and perhaps himself, as well, when he became a last-minute substitute at the USBC State Youth Bowling Tournament All-State in Tuscaloosa.

He placed first in doubles with partner DeCarri Wells.

“Going into the February tourney, he had no expectations and was able to stay relaxed and do well. It helped build up his self confidence,” said his mother, Lisa Schlicter.

In May, Schlicter placed first at the USBC All-State Pepsi Championship held in Montgomery and qualified for the nationals.

“This is the big tournament, the one that everyone wants to win,” he said.

At the Alabama Sports Festival, held at BJCC and run as an Olympic-style event, Schlicter and his teammates brought home the gold medal, and, as individuals, won the bronze medal.

Schlicter added he placed ahead of his nearest competitors by one point in the last frame.

Schlicter and his brother, Sam, have been home schooled for the past five years, and they both enjoy bowling as a weekly activity under the home-school program at Riverview Brunswick Lanes.

Sarah Strickland, who is the league coach and a college senior, said she is so enthusiastic about working with the kids in the program, she is often asked if they are her children.

The home school league enrolls some 50-80 children during the 32-week school year. The summer program caters to those most interested and allows more one-on-one time per individual.

Joe and Sam are blood brothers from Kirov, Russia, who were adopted at an early age by Lisa and Ben Schlicter. Ben Schlicter is from Germany, and the family, who moved from Tampa in 2008, celebrates itself as an international family, flying the flags of their birth countries alongside the American Stars and Stripes.

“We chose to home school the boys initially because of a medical situation with Sam,” said Lisa. “But we stayed with it because we wanted our boys to have a Christian education.” The family has found a church home at Grace Christian in Helena.

Joe, who especially enjoys geometry and art, is interested in studying architecture and drafting design and will soon begin training to volunteer at the Birmingham Zoo. Sam is into music and plays the drums.

The family enjoys traveling and camping together and often gears their travels to educational units, such as visiting Murfreesboro, Tenn., and Shiloh while studying the Civil War.

They also spent an educational week at Mammoth Cave.

The Royal Market has a little of everything