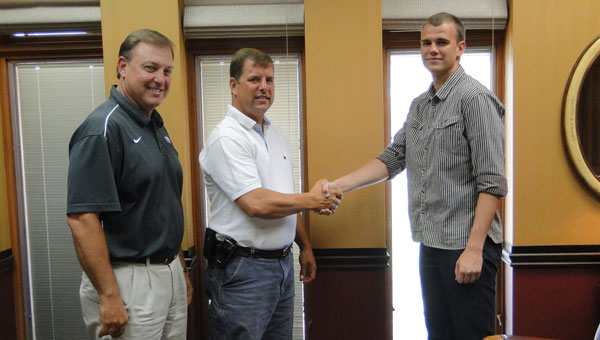 Exchange student Filip Djordjevic, far right, meets with CHS Principal Richard Bishop, far left, and Mayor Jon Graham to thank them for the opportunity to live in Calera for the 2010-11 school term. (Contributed)

Filip Djordjevic left his hometown, Kragujevac, Serbia, headed for Calera on August 11, 2010. Little did he know as he crossed the Atlantic Ocean that on his return trip, with him would go a love for country music and barbecue sauce — Jack Daniels to be precise.

An exchange student, Djordjevic attended his junior year at CHS through a scholarship program with the U.S. State Department. Before leaving June 14, he met with CHS Principal Richard Bishop and Mayor Jon Graham.

Djordjevic had kind words. “I just want to say my final thanks to you and express my gratitude for the real southern hospitality that everybody talks about.”

He spoke of Bishop and Mayor Graham’s wonderful leadership and how being part of CHS’ student body enabled him to have an American experience, but, most importantly, learn leadership skills.

Mayor Graham said, “Part of your good experience is you. Your personality, how you pick up on things and deal with them. Your willingness to come here was a bold choice — that speaks well of you.”

Bishop asked about personalities on the basketball team and Djordjevic responded, “You go from a country boy like Jeremy Hyde to Deondre Haynes…” They laughed together.

Comparing education, he had a greater choice of studies at CHS. Djordjevic aspires to enter law or international diplomacy and feels six years of chemistry taken in his country does him no good. Sports aren’t school-connected in Serbia, and it’s practically impossible to do both.

Djordjevic proudly calls Alabama his second home. “It’s really been great! I’ll remember y’all, yes ma’am and yes sir the rest of my life. My host family has given me so much, I hope I’ve given something back.”

Djordjevic was hosted by Leigh Ann and Neal Parker. Since 2007, they’ve hosted six, soon to be seven, students. Exchange students come to America through scholarships or private pay to develop leadership, learn about democracy and diversity and how the world market economy operates. They’re required to perform a minimum of 30 hours of community service.

Leigh Ann works for American Counsels, an organization that works through the U.S. State Department to find host families for students. “The students are interested in what is going on and how they can change the way things are in their home countries,” she said.

You gotta start ’em early to affect their future