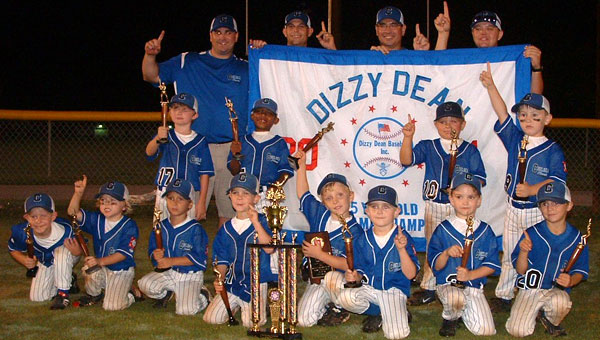 By MIKE McNAMEE / For the Reporter

The Chelsea Sting, a Dizzy Dean all-star baseball team including 5-year-olds, defeated perennial powerhouse Northport 25-20 in the championship game of the 5-year-old tournament to capture the team’s first ever Dizzy Dean state championship June 28 at the Columbiana Sports Complex.

The Sting managed to go 14-0 and defeated every opponent but two by eight runs or more.

“Chelsea was just better than the rest of the field,” said Montevallo coach Lee Hibbs. “They just flat out hit the ball all the way through the lineup.”

Things started to take shape for head coach Shannon McCord’s Sting in early June during the Montevallo Invitational. Led by a punishing hitting attack, the Sting dominated the tournament.

Second baseman Brandon Ritterhoff, shortstop Nicholas McCord and first baseman Jackson Morgan, who was a perfect 58-for-58 at the plate during the 14-game run, gave the Sting three of the best hitters in the state all in one lineup.

“They definitely had an advantage with the hitting at the top of the lineup,” said Cullman County coach Brian Horton. “When some of those Chelsea kids come up to bat, you already know it’s going to the outfield. That’s really something at this particular age. I’ve been teaching kids all over the Southeast the fundamentals of hitting for 20 years, and believe me when I say it is rare to see 12 five-year-olds hit like Chelsea’s team does.”

The Sting constantly put pressure on defenses by instituting the “small ball” element of the game as well. Aiden Isbell went a perfect 4-for-4 in laying down bunts for the Sting.

“One of the more memorable times was when Isbell laid down a perfect bunt to load the bases and Michael Robbins ripped a shot into left center driving in two runs,” McCord said.

McCord knew his team might fall into that “special” category when he looked up at the scoreboard during their first invitational game of the season and saw where they were winning 28-0 after four innings.

“What made these kids successful was that they worked very hard and never complained about the 2-3 hour long practices when it was nearly 100 degrees,” McCord said. “They responded to every challenge that we gave to them and we would not settle for anything that was short of their best. The parents were extremely supportive and the coaching staff gelled well together.”

The Sting managed to win each invitational and regional tournament leading up to the state tournament. The big question was whether or not the Sting could stand up and go head to head with Dizzy Dean superpowers Gardendale and Northport.

It didn’t take long to answer the question as the Sting were matched up against Gardendale in the semifinals. The Sting, who were used to scoring seven runs an inning, the maximum number of runs allowed per Dizzy Dean rules, were held to four runs in the first inning. That’s when McCord turned up his defensive unit a little.

Trailing by three runs in the third inning and facing Gardendale runners at first and second base, Nicholas McCord snared a bullet-like line drive and stepped on second base to help get Chelsea out of the inning with only giving up a single run.

“That was a definite momentum shifter for us,” McCord said. “We had been trailing the whole game and to only give up one run in an inning to a powerful hitting team like Gardendale was crucial for us.”

The Sting offense wasted little time in capitalizing on the shift in momentum. Ponder hit a missile in the left field gap to score two runs. Morgan ripped another two-run double to right-center field as the Sting lit up the scoreboard for seven runs in the inning. Chelsea would strike for seven runs in each the fourth and fifth inning to secure the victory.

The win over Gardendale was a loud statement across the entire Dizzy Dean baseball world. Chelsea Park Baseball Board member Mike McNamee became a Sting believer after the Gardendale game. “You have to understand that I’ve got two older kids that play and I have never seen a Chelsea team beat a team the caliber of Gardendale,” McNamee said. “If someone would have told me that our 5-year-olds would beat Gardendale and Northport on consecutive nights, I would have told them that they were crazy a week ago. “It’s just a tremendous accomplishment for Coach McCord and these kids.”

McCord said his team saved their best play for the final two games.

“I felt like our kids played their best game in the semifinal against Gardendale, just when we needed it most,” McCord said. “I tip my hat to both Gardendale and Northport. They were both tough opponents with very talented kids.”

Ridderhoff was named the tournament’s most outstanding player.

“We are ecstatic about what our 5-year-old group has done,” Ingram said. “I thought Shannon and his staff did a great job with these kids. Coaching a 5 year old is not always easy and this crew really seemed to get the most out of these kids.”

Falcons to host first ever cross country meet in 2011

FROM STAFF REPORTS The University of Montevallo men’s and women’s cross country teams will host their first home meet in... read more