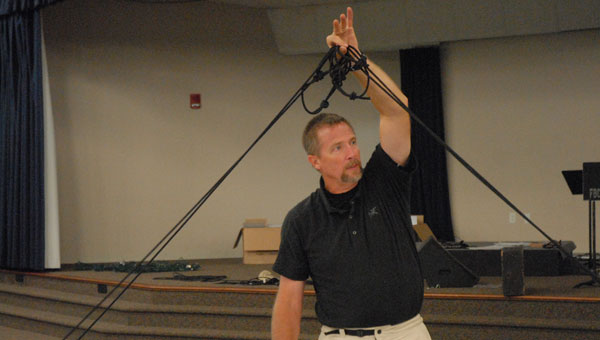 PELHAM – When deacons at the First Baptist Church of Pelham approached church Pastor Mike Shaw about purchasing the former Skatetime building across from the church’s U.S. 31 campus, he was admittedly a bit skeptical.

“We had just built this huge new building, and I thought ‘We don’t need anymore debt right now,’” Shaw said.

“But (church member) Larry Smith and I went to the altar and I prayed out loud ‘God, if you don’t want us to get this building, don’t let us get it. But if it is your will that we get it, close the mouths of the bidders like you closed the mouths of the lions in the den with Daniel,’” Shaw added.

When the church moved to its current location across from Pelham City Park on U.S. 31, the then-owner of Skatetime, a popular roller skating rink and arcade, asked church officials if they were interested in the building. Shaw said he declined the owner’s first offer, and did not think about it again for a few years.

But in 2001, the building came up for auction. After discussing the purchase, the church acquired a $900,000 line of credit and showed up at the auction.

The property had appraised for close to $2 million, but no bidders were willing to compete against he church, Smith said. At the end of the day, the church purchased the building and the property for $650,000.

“The other bidders just started leaving,” said Smith, who attended the auction for the church. “They just said ‘I don’t want to bid against God.’”

Another bidder came to the auction with a check written for $1.7 million, but “tore up the check” after a voice told him not to bid on the building as he pulled in the parking lot, Smith said.

Since the demolition of the old Pelham First Baptist building on what is now Philip Davis Street near the Pelham Police Department, the old Skatetime building has served a variety of roles.

After acquiring the building, the church spent about $1 million on renovations, Shaw said. Today, the outside of the building remains the same as it was 10 years ago, but the inside is significantly different.

A large foyer, housing a welcome desk and a trophy case, leads into a large auditorium and stage where the wooden skate floor used to be. The northern end of the building contains youth classrooms, and the southeastern corner of the building houses a restaurant-quality kitchen.

The large auditorium routinely hosts everything from youth basketball games to dramas and musicals. Speakers in the room usually stand behind a pulpit made from wood pulled up from the old skating floor.

“This is definitely the most-used building we have,” Smith said.

By WESLEY HALLMAN / Sports Editor The HeartinDixie Foundation, along with UNITE|364, have added a charity benefit auction and a... read more