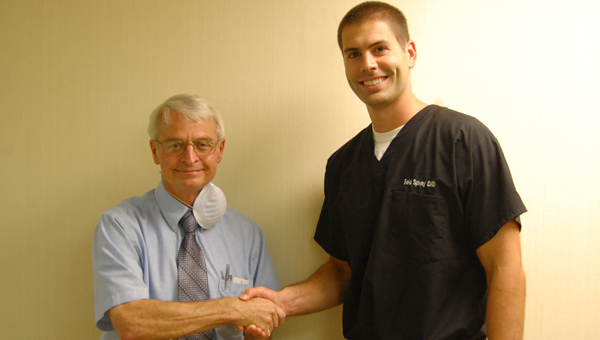 Dr. Reid Spivey, a 2002 graduate of Calera High School, has purchased the practice from Dr. Robert Thornburg and will be introduced to patients starting Monday.

“I always knew that I would buy my own private family practice at some point,” Spivey said. “I’ve always wanted to come back home to serve my family and friends in the community that I grew up in.”

Spivey graduated from dental school at the University of Alabama at Birmingham in June 2010 and spent a year as an associate at a small private practice in Lafayette, Ala.

Spivey said he “jumped on the opportunity” to purchase Thornburg’s practice once he realized Thornburg wanted to reduce his work hours to spend time with family, travel and take additional dentistry courses.

“It’s a great established practice,” Spivey said of Columbiana Dental Clinic, located at 22727 Alabama 25. The clinic will keep its name initially, though Spivey said it could eventually change.

Thornburg has been at Columbiana Dental Practice for 37 years.

“It’s tough to give up some of these patients that have been with me for 37 years,” Thornburg said. “It’s rough, but I think it’s the right time and the right person. I wouldn’t want to bring anybody in that I didn’t feel confident in.”

Thornburg said he would continue to work at the practice “a couple days a week” in addition to filling in when Spivey is on vacation or taking additional education courses.

Thornburg said he plans to take more courses in implant dentistry and “hopefully come back in and incorporate that into the practice.”

Wanting to sell his practice, Thornburg said he had been “looking for somebody that wanted to come to a small town.”

“I was really hoping that somebody that grew up in the area would eventually be available,” Thornburg added. “A few months ago I got a phone call from Reid. He said, “Do you know anybody that is interested in getting an associated in or selling a practice?’ I said, “Yeah, me.”

“When I came out of dental school, there wasn’t an opportunity available to me like this,” Spivey said. “I went to another small town (Lafayette, Ala.) because I wanted to be in a small town. When this opportunity came open, I came back home.”