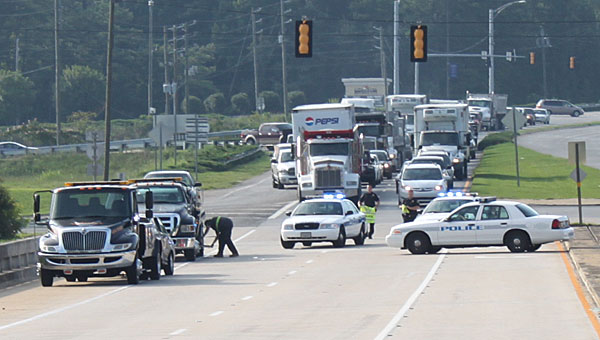 Alabaster police block both northbound lanes on the U.S. 31 bridge over Interstate 65 July 19 as a wrecker works to clear an overturned vehicle. (Reporter Photo/Neal Wagner)

Alabaster police and firefighters were forced to shut down both northbound lanes of U.S. 31 July 19 after a car overturned on the Interstate 65 overpass.

The wreck happened at about 7:30 a.m. when a tan, late-model Ford Taurus overturned while traveling north on U.S. 31. The car came to a rest on its side near the guard rail near the center of the bridge.

Alabaster police officers, firefighters and paramedics responded to the scene, and transported the vehicle’s occupant to the hospital.

As first responders worked to remove the car’s occupant, turn the vehicle upright and tow it from the scene, police shut down both northbound lanes and diverted traffic to the I-65 onramps for about an hour.