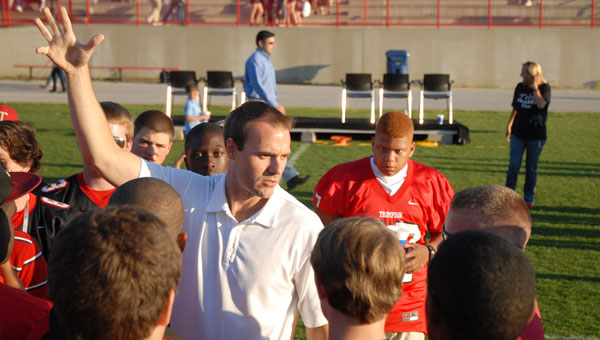 First-year Thompson High School football coach Caleb Ross said the team has made significant strides over the summer, and said he is looking forward to the upcoming season. (File)

First year Thompson High School football coach Caleb Ross said he is “really pleased” with the Warriors’ summer work ethic, and said he is looking forward to the team’s pre-season jamboree with Wetumpka.

While speaking to members of the THS Quarterback Club Aug. 9 at the school’s library, Ross said he has been working to make the team’s practices more high-tempo than they have been in the past.

“I am real pleased with the way things have been going. We have been moving at a very high-tempo,” Ross said. “If we can continue doing that, we can become a much better team.”

At 6 p.m. on Aug. 18, the Warriors will have a chance to see how their summer efforts have paid off, as they take the field for a home jamboree game against Class 6A, Region 4 powerhouse Wetumpka.

Last season, Wetumpka finished the regular season 8-1 and advanced to the third round of the state playoffs, beating Ross’ former employer, Prattville High School, twice in the process.

“I am excited to see how the guys are going to perform,” Ross said. “It will be good to see some competition beside ourselves.”

Aug. 9 marked the team’s 10th official practice with Ross at the helm, but the Warriors have been preparing for the season all summer.

“The practices we are having right now, those are nothing really new to the guys,” Ross told the Quarterback Club. “This is really a review and extension of what we have already been doing. The kids are really starting to buy in.”

In addition to the lightning-fast pace he is working to install, Ross said he is also looking to bring some more changes to the team this year.

After the jamboree, the varsity team will begin meeting on Sunday afternoons to lift weights, review game film and begin preparing for their next opponent.

“If you look at any great program around here, like Hoover, Spain Park ­­– any solid program, they meet on Sundays,” Ross said. “Even when I interviewed for this position, I told them that was critical.”

The Warriors will open up regular-season play with a road game against Stanhope Elmore High School on Aug. 26, and will follow up the next week with a road contest at Homewood. Thompson’s first regular-season home game will come Sept. 9 against Vestavia Hills.

For more information about THS football and the school’s Quarterback Club, visit Thewarriorzone.net.

By Brad Gaskins / STAFF WRITER CALERA – As Calera continues to grow, the city has seen a rise in... read more