Life is meant to be enjoyed, resident says 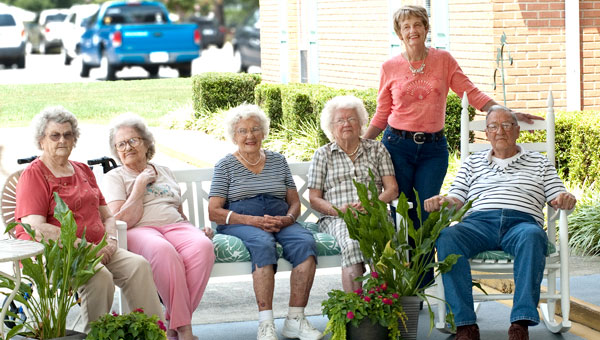 On a recent summer day, Charlotte Tomlin, administrator of Maplewood Lane Residential Assisted Living, tackled the job of repainting the rocking chairs that flank the building’s front entry. Turning her back for a moment, an unexpected gust of wind toppled her white paint can.

Tomlin chose to ‘make lemonade of her lemons’ by converting the spills into a floor cloth-style painting of dogwood blossoms, her favorite flower.

As residents enjoyed their new outdoor sitting area, they told me a bit about themselves and shared some humor.

Verlie Brown told me she doesn’t like to be photographed. “You know a pretty woman makes an ugly picture; I’m proof of that,” she said.

We convinced her to make an exception for the sake of the new patio. Lois O’Kelley, from Columbiana, taught nursing in West Virginia for many years.

Guy Nelle Davis, one of the two oldest residents at 94, maintains her good health by staying active and walking daily. At the age of 60, Guy Nelle, who is named after her father and a favorite cousin, got her pilots license and enjoyed flying for many years.

Sylvia Shell, from Jay, Fla., has three sons and was once a long-distance telephone operator.

Jim Ridge, who grew up in the Woodlawn area, became a Prudential Insurance agent after serving in the Infantry during WWII. Stationed in Marburg, Germany, he was a member of the Military Police. Ridge says he was the baby of his family with five older sisters.

When asked if that means he was a bit spoiled, he replied, “Oh, I guess that’s why they called me rotten.”

The 16 residents participate in exercise classes, create craft projects, take their bingo seriously and have fun with karaoke. “Life is meant to be enjoyed,” said Verlie Brown, “and that’s what we do.”

Charlotte Tomlin told me that another of the facility’s oldest residents, Frances Armstrong, passed away in June. I had been twice to visit Mrs. Armstrong, as she was well known as a dance teacher, owner of Frances Dance Studio in Bluff Park and still dancing in her retirement. Mrs. Armstrong wasn’t up to visiting when I called, and I regret not having met her in person, as she obviously left a legacy to all those she met and taught. One after another, at her funeral, her former pupils rose to recall the encouragement she gave each to be themselves and the confidence she helped to instill in their lives.

This photo of Stevie (left) and Silas Rosser was taken at Silas’s first outing in Helena after arriving home from... read more