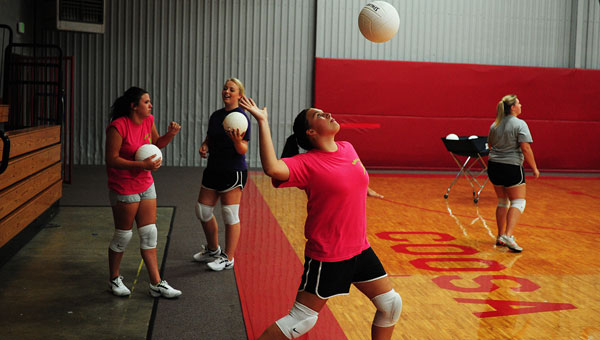 Coosa Valley Academy freshman Hope Myrick serves the ball during a team practice Aug. 15. The Rebels are fielding a volleyball team for the first time in school history this fall. (Reporter Photo/Jon Goering)

HARPERSVILLE — When Amelia Ripley began her career at Coosa Valley Academy, girls’ basketball was her only opportunity to display her athletic prowess.

Ripley will get a chance to become the school’s first ever three-sport standout at Coosa Valley this fall when the school fields its first ever volleyball team.

Jean Ann Sprayberry, who will serve as the Rebels’ first volleyball coach, said Ripley and her classmates are excited about being able to compete in a fall sport.

“They’ve shown a lot of enthusiasm,” Sprayberry said. “The girls have worked hard.”

Sprayberry said first-year athletic director and head football coach Bobby Hughes was instrumental in getting the program started. Hughes, who served as an assistant football coach under Vince DiLorenzo and head baseball coach the past two years, saw the importance of a volleyball program at other schools and wanted the same opportunity for athletes at Coosa Valley.

Sprayberry had plenty of interest from girls roaming the hallways in Harpersville. Her program will include 23 student-athletes in its first season, including 11 players on the varsity team.

Ripley, the lone senior on the team, will serve as a team captain.

Sprayberry said the group is ready for the season opener. The Rebels will start of the season with its biggest regular-season match, a battle at rival Cornerstone Christian School on Aug. 25 in Columbiana.

“It’s a good thing for the girls,” Sprayberry said. “I think it’s wonderful.”

OUTLOOK: The Eagles, who reached the Alabama High School Athletic Association Class 6A championship match a year ago, will look for leadership from two returning starters in senior outside hitter Sara Goodwin and junior middle blocker Emily Cosgrove. Sophomore setter Hannah Beach will see her role increase in her first season setting the plate for the Eagles.

OUTLOOK: The Lions will remain in the hunt for the Alabama High School Athletic Association Class 5A championship with veterans Logan Nasworthy and Carly Cline, both seniors, leading the way. Junior setter Adeline Reiser, along with junior outside hitters Lizzie Baumbach and Claire Carter, are also back after playing important roles a year ago.

OUTLOOK: The Hornets will rely heavily on senior setter Jesse Vohler, who sets the table for the offensive attack. Fellow senior Samantha Colyer returns as the team’s top outside hitter. Chelsea will need a few other players to step up in search of its second consecutive postseason appearance.

OUTLOOK: The Wildcats will rely heavily on senior middle blocker Courtney Shields and junior outside hitter Jasmyn Buie this season. Senior defensive specialists Brittani Morris and Jessica Rasco will also play key roles on an improving squad. Shelby County will have plenty of depth on its roster.

OUTLOOK: The Eagles will be led by senior setter Kellie Rasmussen and sophomore middle blocker A’Kia Harris, who have each played a key role the past two seasons. Calera will benefit from a nice mix of upperclassmen, including three seniors.

OUTLOOK: Indian Springs will look for leadership from senior setter Lauren Plouff and junior middle blocker Ambria Hardy. Junior defensive specialist Yuka Sanui will also play a key role this season. Indian Springs, which reached the Class 3A playoffs a year ago, will add a few more players to the roster following a tryout session this week.

OUTLOOK: The Bulldogs are in good shape to make a deep postseason run with six seniors with plenty of experience returning, including all-around athlete Mallory Anderson and setter Kathryn Ray. Montevallo is loaded with upperclassmen with an additional five juniors on the squad.

OUTLOOK: The Yellow Jackets will rely heavily on a pair of seniors in outside hitter Michele Brasher and defensive specialist Courtney Holston. Fellow senior Joleen George will see her role increase this season. Vincent is searching for a spot in the postseason after being eliminated in the area tournament semifinals last year.

OUTLOOK: The Chargers made a lot of improvement last season and will look to move a step closer to an Alabama Independent Schools Association Class 1A region title this year. Senior setter Jaclyn Largin, the most experienced player returning, will need to provide leadership on a roster full of youth.

OUTLOOK: The Rebels, who are fielding a volleyball squad for the first time in school history, will feature a roster full of youthful players. Sprayberry said the players have been working hard on conditioning and are excited about taking the court for the inaugural season. Many of the players on the squad also play softball and girls’ basketball at the school.

OUTLOOK: The two-time defending Alabama Christian Sports Conference champions will need to rebuild with only one senior, setter Kate Foster, on the roster. However, the Lightning shouldn’t be underestimated with a talented junior class. The group of juniors includes last season’s ACSC tournament most valuable player Elizabeth Ragland, who is a versatile athlete at middle blocker and outside hitter.

OUTLOOK: Outside hitter Teenie Donlin leads an experienced group of six seniors on the Eagles’ squad. Fellow seniors Brooke Machen, an outside hitter, and Hannah Lane, a middle blocker, will each play a key role. Senior setter Audrey Best will be in charge of getting the offense started. The Eagles may add a few more players to the squad before the season begins.

OUTLOOK: The Falcons are coming off the best season in school history after picking up the program’s first ever win in the NCAA Tournament a year ago. Senior setter Anna Garrison will set the table for the Falcons. Sophomore middle blocker Manyi Ati will also play a key role this season. Montevallo returns a total of three starters from last season’s team.