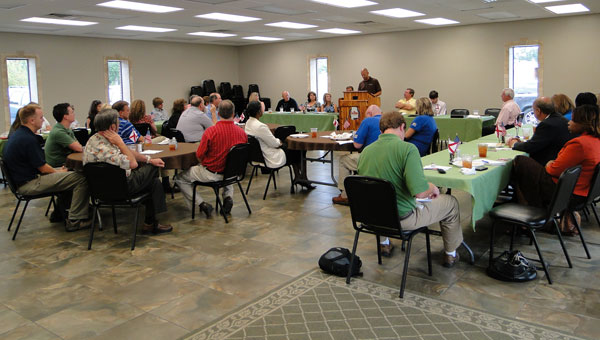 “Sales tax revenues continue to hold their own,” Graham said. “We’re not quite making budget as far as sales tax revenue, but we’re real close, and I’m pleased with that. The good news is we’re knocking down debt, and we must be diligent in this.”

A shopping center group is interested in land at the U.S. 31 and Interstate 65 exit for a “big box” retailer. The mayor has been in contact with the group and is presently collecting housing and population data for them.

“The bridge is our main clogged artery, and I’m advocating the need to widen it, but we need to move on with the bypass,” he said. “It will make access to I-65 much easier and do away with some of the trucks traveling through downtown Calera.”

“With our new SITEOPS software program, we can develop conceptual site plans,” Pappas said. “If you’re looking at property and know the building you want, we can create a preliminary grading and cost assessment. What normally takes weeks and thousands of dollars in consulting fees, we do in our office in just a couple of hours. The tool is instrumental in drawing developers.”

Pappas reported the interstate overpass will expand to seven lanes. Concerning the bypass, a public involvement meeting will be held at the community center Sept. 20 from 3-7 p.m. before environmental documents are submitted in the fall.

Other projects: A conceptual floor plan and cost estimate for the fire museum is prepared. Storm drainage is complete at the new sports complex, and utilities are going in now. Roads and parking lots will be constructed within the next six months and baseball, softball, soccer and youth football ball fields in spring 2012. The new concession stand at Oliver Park is expected to be finished before football season ends.

Getting a head start for a successful school year