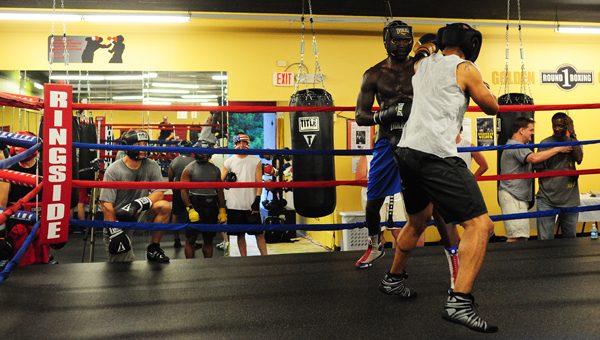 Deontay Wilder spars during a match for the grand opening of the American Fitness Center's Golden Gloves boxing facility in Hoover on Aug. 23. (Reporter Photo/Jon Goering)

HOOVER — Olympic bronze medalist Deontay Wilder stopped by Hoover on Tuesday to jump in the ring with some locals.

The Tuscaloosa native was in town for the grand opening of the Golden Gloves boxing facility, located at American Fitness Center on Valleydale Road.

Wilder, who trained with Golden Gloves franchise holder David Godber on the way to his Olympic appearance, returned to support the facility that helped coach him.

“It’s friends and family,” Wilder said. “We’re kind of all a big family.”

The main event featured Wilder sparring with two pro boxers, Gundrick King and Michael Gibbons, and five amateur boxers, all of whom train with Godber and the Golden Gloves team.

Wilder remained in the ring throughout the night while the other boxers rotated in for their chance to take a swing at the former Olympian.

And he needs to stay sharp. Wilder is preparing for his 18th professional fight against Dominique Alexander on Saturday, Aug. 27. The fight will take place at the Water Oaks Farm Arena in Tuscaloosa at 7 p.m.

Following the sparring, Wilder stuck around for a meet-and-greet, signing autographs, speaking with fans and giving advice to aspiring boxers.

“I tell them work hard, give it all you got,” Wilder said. “That’s throughout life. Give 100 percent, whether you’re in the gym or outside of the gym.”

Wilder said he believes coming back to help inspire younger boxers is the right thing to do.

“There’s a lot of guys here who are future prospects and Olympians,” he said.

Godber, who has helped train him throughout his career, said Wilder is the perfect ambassador for the Golden Globes organization, for he exemplifies those qualities Godber hopes to instill in younger, aspiring athletes.

“He is now progressing to a major world career, but has never forgotten about his roots,” Godber said. “Deontay is someone you want to emulate. He is just a phenomenal person. He’s everything that you’d want in an individual.”