MONTEVALLO – The members of Ward Chapel A.M.E. Church, under the leadership of Pastor Terry McCreary, honored the oldest member and mother of the church, Sister Onnie Dell Fluker, who turned 93 years young on Aug. 21, 2011. 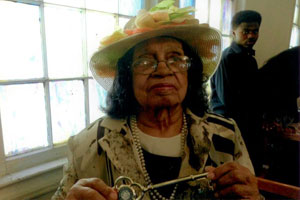 Mayor Ben McCrory was a special guest who presented the key to the city of Montevallo to her. Some guests were the Alpha Pi chapter of Gamma Phi Delta and members of Harris Pride Chapel 437. Mrs. Fluker’s grandson, Rance Gaddis, and his family and some of her former students attended, as well. Mrs. Fluker retired from the Shelby County Board of Education in 1980. She was very happy and surprised and thanked everyone for coming.

Senior nutrition for the caregiver

By JENNIFER DUTTON / Guest Columnist Aging is a part of life. We all will become caregivers at some time.... read more