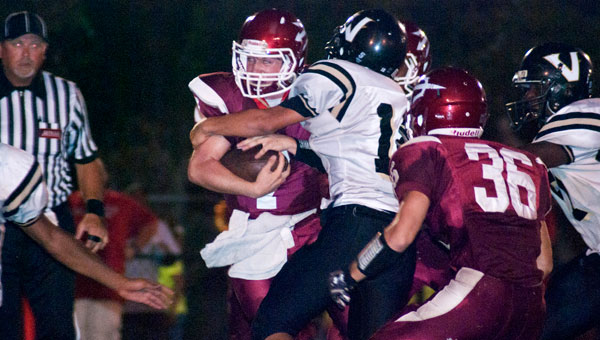 Maplesville led 28-0 at halftime and increased the margin to 35-0 in the third quarter before Vincent scored two late touchdowns against reserve players.

The scoring started quickly, as Cameron Morrow ran the first play from scrimmage 68 yards to put the Red Devils up, 6-0.

The teams punted back and forth a few times before Vincent’s Terio Rogers picked off a Colby Chambers pass to give Vincent a spark.

However, a block in the back penalty and a sack by Alex Payne, who was in the backfield all night long, quashed the Yellow Jackets’ momentum.

The second quarter, particularly the last seven minutes of it, would belong to Maplesville.

Chambers found Anthony Johnson from 9 yards out to put the Red Devils up 14-0 after a successful PAT.

On Vincent’s next possession, Maplesville’s Kelvin Hall would pick off Damauntey Johnson, taking the ball all the way back for a 60-yard defensive touchdown.

After the Yellow Jackets’ next drive stalled, Payne recovered a punt blocked by Brett Connell to give Maplesville good field position.

The Red Devils would need a lot of plays, though, to score. A 42-yard pass from Chambers to Johnson set up an 8-yard TD pass caught by Brandon Morrow.

The quick touchdowns gave the home team a 28-0 advantage with 1:23 to go before the break.

A fumble recovery by Cole Spencer set up Maplesville’s last score of the game, an 8-yard touchdown run by Damian Mitchell.

Vincent added two touchdowns in the fourth quarter on a 15-yard run by ShaCorry Lilly and a 20-yard run by Michael Gilham.

Maplesville ended the night with 180 yards rushing, led by Cameron Morrow who had 93 yards.

The Red Devils also had 125 receiving yards, with Johnson accounting for 60 of those.