Some dreams do come true 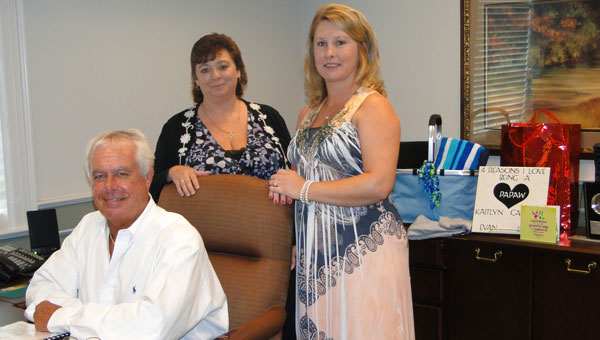 Everyone, not long after they enter the workforce, dreams of retirement. Some dream of spending their golden years traveling, while others dream of sand, a chair and an umbrella. Some people sell everything they own and buy an island, whereas others are content to just have their mortgage paid off.

Norman said his greatest accomplishment is his two daughters and four grandchildren.

“I intend to spend a lot of time with my family. I’m more proud of them than anything,” he said.

He also plans time at the beach and working in his yard.

“I know this sounds crazy, but I’m big into yard work. Some people despise it, but I really enjoy it a lot,” he said.

Norman’s daily activities include exercise and walking. He’s an avid Auburn football fan and enjoys baseball. When he enlisted in the Marines in 1968, he thought he was headed to Vietnam, but ended up in Hawaii playing for the Marine Corp baseball team for three years.

Branch administrative assistants Lisa Beasley and Cathy Johnson describe Norman as a man who is easy to get along with and wonderful to work with.

“I’ve worked with Wayne for eight years,” Beasley said. “He’s always wearing a smile and consistently reminds me our business is our customers. Without them we don’t have anything.”

“He’s very understanding and empathetic,” Johnson said. “Because of his family values, he works with us in those kinds of situations. He’s a confidant and a great listener.”

Teller Glenda McGuire said Norman is the best boss she’s ever had.

“Wayne is a good guy to work for, one of the fairest people I know. I’ll miss the stories he tells about the grandbabies — we love hearing them.”

“I’m a simple guy; life’s pretty simple for me. I kinda keep it that way, and I like it that way. Right now, I’m just going to enjoy time with my family. We’ll see what happens after that,” he said.

A reliable informant said Norman is a big fan of “Dancing With The Stars.” Maybe the next time we see him, he’ll be dancing with Cheryl Burke or Edyta Sliwinska.