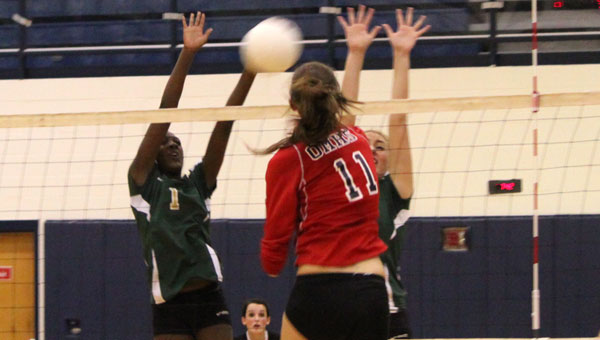 Pelham High School seniors Porsha Tolbert and Ashley Kate Kepler, from left, attempt to block an attack by Oak Mountain junior Emily Cosgrove in the Eagles' victory over the Panthers in a Class 6A, Area 10 match Sept. 1. (Reporter Photo/Kala Bolton)

NORTH SHELBY — All that stood between the Pelham High School volleyball team and victory Sept. 1 was a wall.

Physically, there was the wall Oak Mountain sophomore Hannah Beach, junior Emily Cosgrove and seniors Sara Goodwin and Ashton Slawinski put up at the net, racking up 11 blocks.

But the Panthers’ biggest challenge was breaking through their mental wall.

“I think it comes down to our team confidence,” said Pelham head coach Haven O’Quinn. “We have a lot of skills we’ve got to work on, but for us its confidence. It’s mental.”

“We definitely didn’t play our best,” said Pelham senior Dana Allen, who racked up nine kills on the night. “We didn’t show up to play.”

Both teams were neck-and-neck during the first game, remaining tied at 22-22. Oak Mountain soon took the game on a kill from senior Abbi Bourque.

Bourque and sophomore Hannah Beach led the Eagles with nine kills in the victory. Beach also had a team-high 23 assists.

Halfway through the second game, both teams remained even, but the Eagles soon sealed the win at the end with three blocks from the wall upfront, two service aces from Cosgrove and one kill each from Beach and Goodwin.

The Eagles looked even more dominant in the third game, strengthening their lead early and taking the match on a service ace from senior Felicia Bailey.

“I think we all played really good as a team,” said Oak Mountain senior Amanda Marks. “We fought and we finished strong.”

While the Eagles are happy to take a win against their rivals, head coach Lance Woods doesn’t want his team to get complacent.

“I’m not excited about our play,” Woods said, “but we’ll get better. We need to learn to play defense. We had too many unforced errors to be the type of team that we want to be.”